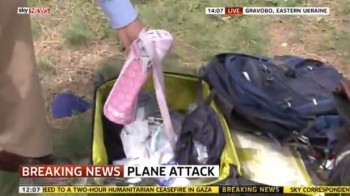 Colin Brazier apologized for picking up things from a suitcase at the crash site. He said his daughter has a bottle just like the one in this video (Credit: YouTube, London's News Videos)

During a live segment on Sky News this weekend, Brazier went through a suitcase and even commented, “We shouldn’t really be doing this, I suppose,” as iMediaEthics has written.

In a column for The Guardian, Brazier explained what happened and admitted, “I got things wrong.”

“While presenting Sky’s lunchtime coverage of the flight MH17 disaster, I stooped down to look at a piece of debris,” he wrote. “It was a child’s suitcase. I put my hand inside and lifted up a water bottle and a set of keys. As I did so my mental circuit-breaker finally engaged and I apologised instantly on-air for what I was doing.”

Brazier responded to critics and the “outrage on Twitter” by saying he wanted to “offer another view” of what happened and his comment about “we shouldn’t really be doing this.”

While Brazier twice referred in his column today to that statement being an on-air apology, iMediaEthics notes that he never actually said “I’m sorry” during the broadcast. Sky News, however, did apologize that day in a statement. “Both Colin and Sky News apologise profusely for any offense caused,” Sky News said.

Brazier also claimed that his on-air remark was “selectively quoted.” However, seeing as that was his only comment on-air about inappropriately moving crash scene items, iMediaEthics disagrees.

He said Sky News intentionally chose to “avoid pointing a live camera anywhere a corpse might be seen,” opting instead  for belongings because “they brought home the poignancy of the tragedy.” He also claimed that “Other journalists, some well known broadcasters, were handling belongings and speaking to camera. In a place without rules, I foolishly took that as a precedent.”

(Speaking of children, that “everyone else was doing it” excuse strikes iMediaEthics as a rather childish on Brazier’s part).

According to Brazier, when he was looking at the suitcase, he saw a “pink drinking flask,” which is something his young daughter has. The sight of that caused him to emotionally break down, he said.

“I bent down and, what my Twitter critics cannot hear – because of the sound quality of internet replays of the broadcast – is that I had lost it,” he wrote. “It is a cardinal sin of broadcasting, in my book anyway, to start blubbing on-air. I fought for some self-control, not thinking all that clearly as I did so.”

Brazier commented that the clip of him going through the suitcase went viral on social media. iMediaEthics notes that it also went viral in mainstream media, as countless sites reported on his transgression.

A sample of media stories:

He described the crash scene as “like the set of a horror story” with “the nauseating scent of death that clings to me still.” Unlike other crash sites, he remarked that there was “no meaningful law and order” because “it is a warzone and the men in charge carry guns and grudges.”

Which would seem to be all the more reason for a journalist to adhere to fundamental rules of civilized behavior at such horrific scenes, rules that really don’t need to be stated by representatives of “law and order.”