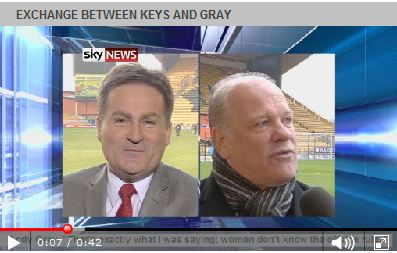 Andy Gray was fired and Richard Keys resigned over their comments deemed sexist were published in the news and online. (Credit: Sky)

Sky News has fired one of its sports “pundits” after two incidents of sexist comments.  The pundit, Andy Gray, was first warned by the network after his remarks last week about sports official Sian Massey were “recorded and leaked to a Sunday newspaper.”

But, after “a lewd comment” he made in December to Sky Sports News presenter Charlotte Jackson was posted on YouTube, Gray was fired.

Gray asked Jackson “Can you tuck that down there?” — referring to putting his microphone in his pants.

His recent comments were made in an “off-the-air conversation with Sky presenter Richard Keys.”  Gray and Keys “disparaged lineswoman Sian Massey ahead of last Saturday’s Premier League match between Wolves and Liverpool, saying she was unlikely to know the offside rule.”

Gray reportedly went on to comment about Massey “in a separate pre-match discussion with a Sky reporter.”

In a statement, Gray apologized and said:

“I am very sorry that certain comments made by me have caused offence. Such comments were made off-air to work colleagues, and were of course never intended to be broadcast.

“I was very upset when the comments were brought to my attention, and it was my intention to apologise on Monday night when I was back on air for the Bolton v Chelsea game.

“Sadly I was unable to do so as I was suspended from the show by Sky Sports and have now been sacked.  Football is my life and I am devastated by losing the job that I love.

“I am equally upset that third parties have been dragged into this issue. I ask that the media respect their privacy so that they can continue in their roles. I have worked for Sky Sports loyally for over 20 years and I do not wish to comment further at this time.”

Keys also apologized. He has reportedly said:  “For the immediate, I would just like to say how deeply sorry I am for the part that I have played in causing this furore.”

The Sun reported Keys said  “I have never had a problem in life saying sorry when I am wrong. It was wrong, we were wrong.  Our prehistoric banter is not acceptable in a modern world.  There is no place in a modern workplace for that sort of talk.”

Keys initially responded to questions of whether he would resign: “I am considering everything, there are all sorts of options on the table at the moment.  It is very possible that somebody at Sky might take a view in the time I’ve been sitting with you today, that they need to and will act. This has not played its way out yet.”

Keys ended up resigning Jan. 26.  In a statement, he said:

“It was wrong and should not have happened.  I have thought long and hard and reached the decision that it is time to move on.  Going forward without Andy would have been almost impossible.

“I am and will remain proud of our work with football at Sky Sports and grateful to the many people who have worked with me.”

“Andy Gray’s contract has been terminated for unacceptable behaviour. After issuing a warning yesterday, we have no hesitation in taking this action after becoming aware of new information today.”

Sky confirmed that Gray’s December 2010 comments were the reason for the firing. See the YouTube clip of Gray’s 2010 comments here.

The AFP reported that Gray reportedly earned £1.7 million each year for that job.