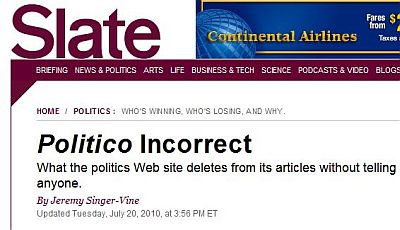 This detail from a screenshot shows Slate's article requesting corrections by Politico...The article now has its own corrections.

However, the Slate article on Politico’s corrections, by Jeremy Singer-Vine, itself, now features a handful of corrections.  And, it turns out Slate’s own corrections policy also would have allowed the non-disclosure of almost all of the same corrections they called out in Politico in the first place. Columbia Journalism Review  quoted Michael Newman, the Slate editor  “responsible for” the article, admitting as much–“We were sort of calling them out for something we do.”

“There’s a certain sense of karmic justice, though, that Slate’s takedown of Politico has had the unintended effect of shining a light on a misguided Slate policy,” Craig Silverman, a journalist and expert on media errors, wrote July 21 on his blog, Regret the Error.

Slate’s Jeremy Singer-Vine wrote July 20 that he created “a series of fairly simple computer programs to monitor changes to all major Politico articles at regular intervals.”  He found that about 3 percent of 400 articles over three weeks were altered without alerting readers.

Singer-Vine started his project as a result of Politico’s lack of disclosure of an update in a June article.  As StinkyJournalism wrote June 27, Politico deleted at least two sentences from a June 22 article on Rolling Stone’s profile of Gen. Stanley McChrystal  without explanation or disclosure.  When media bloggers and writers noticed, they weren’t happy.

Most of the changes Singer-Vine’s programs found were “trivial,” but twelve were “noteworthy.” Singer-Vine noted that three of the articles he reviewed contained notice of correction.

Singer-Vine wrote that Politico should consider publishing a corrections policy.  Politico’s unwritten policy is to append notices to articles “where something substantive was not correct,” Singer-Vine reported Politico’s editor-in-chief John Harris said.

Likening Politico to a wire service, Singer-Vine wrote that Politico “seems to have rewritten the old wire-service motto,” from “Get it first, but first get it right” to “Get it first, and if you don’t get it quite right, quietly change it later.”

But, in a July 20 11:35 p.m. update, Slate wrote that Politico’s editors noted that Slate’s corrections policy would allow “many of the changes Politico made to its stories.”  Slate’s correction policy doesn’t require disclosing “minor corrections that we ourselves catch within 24 hours of publication,” Slate posted.

“Any time an article is corrected, a note is appended to the bottom of the article detailing the original error and the correction. The offending sentence gets an asterisk and a link to the correction. Every Friday, Slate publishes a list of all corrections made in the past week,” Slate’s disclosure reads.  The disclosure is found in Singer-Vine’s article, if one holds one’s mouse over a gray plus sign  (+) at the end of the article.

While the Politico deletion and the Slate article “point to a very live issue in online journalism,” Slate’s article itself contained errors and was somewhat hypocritical, Hendler stated.

Just one of the the dozen updates Singer-Vine wrote about “likely took place” more than 24 hours after publication, Hendler wrote.

Politico posted corrections notices to 10 of the articles Slate picked out.  The other two: corrected “some rather garbled, imprecise, but essentially correct language” of House Republicans’ efforts and the other “dialed back the strength of an editorial conclusion” in the Al Gore sexual assault story.

Hendler reported that Slate’s politics editor Michael Newman, who was “responsible for the piece and sidebar,” said they should have checked the Politico stories for corrections notices prior to publication.

“We should have checked it again,” Hendler reported Newman said.

“But the back and forth on inaccuracies in Singer-Vine’s story as originally published distracts from the question of how Slate cooked up a piece so seemingly blind to its own corrections policy, and so open to a charge of hypocrisy,” Hendler wrote.

Hendler reported that Singer-Vine said he thought Slate corrected its errors, but didn’t find out about Slate’s corrections policy until the final or second to final edit.

“We were criticizing someone else’s corrections policy, so I felt I had to accurately describe our policy. That would have been the first step. And I did it. So good job, Michael. The second step would be ‘How would what we’re pointing out look under our policy?’ And I didn’t do that well. Or at all. So bad job, Michael,” Hendler reported Newman said.

Grieve said Politico asked Slate to either remove or “amend” the story’s last paragraph because it’s “a hypocritical cheap shot for them to take.”

Politico blogged  July 21 that its editors and every online news editors “can do better” when it comes to disclosing changes to stories online.

Craig Silverman also posted on Regret the Error a statement by Politico’s Tim Grieve, which called Slate out for having “now posted no fewer than six separate corrections to its story and the accompanying sidebar.”  Outside of the errors which Slate corrected, Grieve wrote that Slate “mischaracterized comments made by POLITICO’s editor-in-chief; we’re still trying to get them to own up to that one.”

“Their story now begins with a 50-word correction and ends with a 125-word correction, and the sidebar is studded with doozies like this: ‘Correction, July 20, 2010: A previous version of this article incorrectly reported that Politico hadn’t yet acknowledged its correction’,” Grieve wrote.

Silverman wrote July 21 on his blog Regret the Error that Slate’s article suggested that scrubbing (wiping away errors and not alerting readers) is a problem at Politico.  “Bottom line: scrubbing is unethical and unprofessional.”

Silverman wrote in an update to his story that Slate should change its correction policy because “twenty-four hours is a long time online, and the proper policy is to fix errors and correct them, regardless of time frame.”  Also, he wrote that regardless of when the error is found, if it’s “a factual error or typo that changes the meaning of a sentence” it “should be noted.”