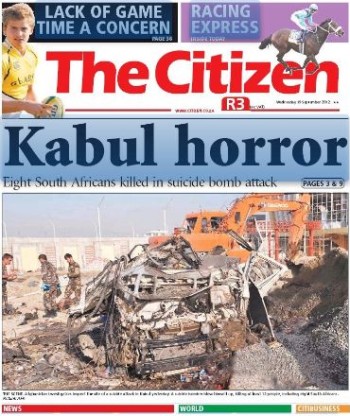 See above the doctored photo on the Citizen's front page. Two bodies were cloned out of the picture. (Credit: The Citizen via Journalism.co.za)

South African newspaper The Citizen fired staff member Johann Hattingh after the newspaper published a Photoshopped image, The Citizen’s editor Martin Williams reported in a Sept. 28 column. As iMediaEthics reported Sept. 20, The Citizen apologized for Photoshopping the Agence France-Presse picture in its Sept. 19 edition and explained that it meant to “blur” two bodies from the photo but the two bodies ended up being “digitally cloned out of the photo.”  The Citizen is a daily newspaper based in Johannesburg and reports on its website that it has “443 000 daily readers.”

The Mail & Guardian reported that the fired staff member was Johann Hattingh, a “photographer who drew attention” to the doctored photo on Twitter.  The Citizen had published a Sept. 27 report confirming that an employee was fired following a “disciplinary hearing under an independent, external chairperson” who “found [the staff member] guilty on two charges:

Citizen editor Martin Williams told iMediaEthics by email that Hattingh “was fired, after an enquiry by an independent chairman, not by me, not for tweeting but for the false and defamatory nature of his tweets.”  Hattingh told iMediaEthics that he “was not part of the decision to blur or clone the photograph” and that the photo was from Agence France Presse originally.  Williams confirmed that Hattingh “was not involved in any decision about the use of the photo, nor did he have a hand in its manipulation.”

Separately from Hattingh’s firing, Williams told iMediaEthics that “All the staff members responsible for the cloning out of the bodies have been disciplined on standards after this incident. Not one of them can be in any doubt about what went wrong and how they can help ensure there is no recurrence.”

Hattingh told iMediaEthics that he has “served the newspaper with papers for unfair dismissal and we will meet in labour court soon.”

Hattingh’s Twitter account as of Sept. 29 doesn’t show any of his own tweets on the photo, beyond re-tweeting other comments about the case. He told iMediaEthics by email that he “did delete the tweets after the editor called me in and gave me a talking to, including letting me know I will have a disciplinary hearing against me because of the tweets.  I did not want to get myself into any further trouble than I was already in.”

Hattingh explained to iMediaEthics that “the tweets in question relate to me saying that what the newspaper did was unethical, and also asking if an editor thinks it is okay to digitally manipulate a news photograph what would be next, journos making up stories?  That was the essence of it.”

According to The Citizen’s editor Martin Williams, one of the tweets was republished on Oceans Vibe.  Williams said that Hattingh’s tweets “went on to say that the pictures editor had been overruled by more senior staff members, and that the senior editorial staff had made the decision to publish the manipulated image.”

But, Williams disputed this, writing to iMediaEthics that

“The truth is the picture editor said nothing about it at evening conference before publication, and nothing to me the entire next day. No senior editorial staff member was ‘ok’ with it. Hattingh was not at any meetings where editorial staff discussed this, nor was he aware of who committed what errors along the way.  These and other allegations he made were not only false but they tarnished the reputations of the entire editorial staff.”

Hattingh confirmed to iMediaEthics that he “did not attend the meeting at which the pic and its use was discussed” and that his “tweets followed after a conversation I had with the pics editor on the day the pic was published.”

“I posted several tweets the day after, and yes it is true that one of them said the pics editor complained but was laughed off. The pics ed corrected this with me after my tweet saying that he meant he complained to the editor over several months about pics being cropped badly or mistakes in captions but was ‘laughed off’.

“I have to admit I do not wish to enter into a ‘he said she said’ finger pointing with Martin Williams here.  The bottom line is this: Senior Editorial staff signed off on a front page with a digitally manipulated pic on it. They did this even after there was a discussion about the pic at the editorial meeting. There was no apology from  them on The Citizen online page on the same day, and there was no apology from them in the printed paper the next day. Only after several other papers and the National Press Club of South Africa started calling and asking for explanations did The Citizen issue a statement.

“I made the tweets because I was furious that the credibility I tried to build up over 16 years as a journalist could just be ruined by a decision like that. I stick by what I said on Twitter. In this game you only have your name, and I am glad that my name will not be linked to a newspaper whose editor ran a cloned pic on the front page and then had the audacity to say that ‘not one reader complained.'”

iMediaEthics asked Williams if he had any response and if he could confirm that the newspaper has received Hatttingh’s papers.  WIlliams wrote by email:

“Thanks but I have grown weary of explaining these matters over and over.  I confirm that Hattingh is challenging his dismissal.  We are confident of our case.  There is more to it than has been published. For legal reasons that’s all I’ll  say for now.”

Williams said that The Citizen follows the South African Press Code, “but I don’t think it is adequate” so he has “asked the pictures editor to review the relevant policies of all major agencies and a few top newspapers. I have also asked him to draft a new policy for us. In the interim, I don’t want anyone even to suggest digital manipulation.”

Specific to The Citizen, Williams told iMediaEthics that “Our disciplinary code makes it clear that bringing the company name into disrepute is cause for dismissal at the first offence. Our computer usage policy covers this too. Before this incident we drafted an expanded social media policy, which Hattingh had not yet signed.”

Hattingh confirmed that “the newspaper has no social media code of conduct that I signed when I joined.”

“The way I see this whole drama is that a journalist (reporter or photographer) only has his/her name in the industry. If you lose credibility, either inside the industry or with readers, you are shot. No-one will believe what you write and the pics you take will lose their power because no-one will be looking at the context of the pic anymore but rather scrutinizing every mm to see if it was cloned!” Hattingh wrote to iMediaEthics.

He added that he “cannot believe that senior editorial staff like a chief sub or an editor will sign off on a front page with a pic that was cloned, especially after it was such a discussion at the earlier editorial meeting. I can also not believe that the editor of a paper will not apologise for it immediately online on the day, or even in the printed version the next day. I worked really hard for 16 years to build up a name for myself as a credible journalist, and I refuse to let such decisions by senior editorial staff taint my career.”

Citizen: We Don’t “Treat Bodies Differently Based on Race”

Williams also responded to Wits University journalism professor Anton Harber’s previous comments to iMediaEthics.  Harber had told iMediaEthics that he thought The Citizen‘s apology “adequately deals with this case” but commented that “there remains a suspicion that [The Citizen] treat black corpses different to white ones” and called for a “clear policy that applies to all depictions of dead bodies.” Williams told iMediaEthics in response:

“I wish Anton hadn’t said that. We know each other. He could have put it to me instead of casting further doubt on our intentions.

“No, The Citizen doesn’t treat bodies differently based on race. That would be absurd. Most South African newspapers, including The Citizen, carried front-page pictures of the August 16 Marikana massacre, which showed black men lying dead in the veld.

“I don’t think any carried front-page pictures on September 19 of white bodies after the Kabul blast. Are we all now racists? Of course not.

“We carried a front-page picture of your Ambassador to Libya, after that horrible attack in Benghazi. He may have been dead. He’s not black.

“This question is really distasteful but you did ask.”

iMediaEthics asked Harber if he had any response to Williams’ comment. Harber said via email:

“I do not think Martin or his staff are racist. I merely picked up on an element of the debate around the issue, something which Martin himself had spoken about. All I was saying was that if you do not have a clear policy, and then you depict bodies sometimes and not others, you are vulnerable to such suspicions, particularly in a racially-charged situation such as we have here. You need a clear and consistent policy and practice in order to avoid such problems – and The Citizen did not have that.”

In his column, The Citizen’s Williams also called out both the National Press Club (which he disclosed he is a “so-called member” of) and the Professional Journalists Association for weighing in on the doctored photo without contacting him, and he countered the Mail & Guardian’s reporting that the Citizen apologized “in response” to the National Press Club’s “general media statement.” According to Williams, because the club didn’t contact the Citizen “the apology was not sent to them by us” and “they have no right to demand anything from us.”

The National Press Club released a Sept. 20 “media statement” (available on Facebook) that reads “The National Press Club has called on The Citizen newspaper to explain itself following allegations that it digitally manipulated its front page photo of Wednesday, 19 September, of the suicide attack on a minibus in Kabul, Afghanistan on Tuesday.”

Further, the club quotes its chairperson Antoinette Slabbert as saying:

“News photographers are, in essence, journalists who work in pictures.  Manipulating photos that portray facts seems totally unethical.  We believe The Citizen, if it did not want to show dead bodies in the photo, should have chosen to use an alternative photo instead.  We call on the newspaper to explain this to the media fraternity and its readers.

“Photographers and journalists have to adhere to strict ethical standards when doing their job and we believe they should be allowed to speak up when their rights are affected.  The National Press Club will continue to be vocal on issues affecting ethics in the journalism profession.”