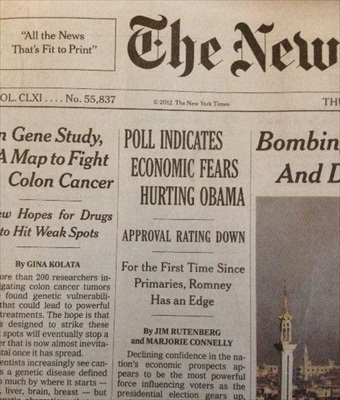 See above the NYT homepage.

Who wudda thought?  That may be news for anyone who hasn’t been living on planet Earth for the past several years, but for the rest of us – do we really need another poll to tell us that the bad economy is not good news for Obama? The finding is about as newsworthy as, say, “Poll Finds Paint Doesn’t Dry Well in Wet Weather.”

It’s not that I don’t value polls giving us updates about the latest mental gyrations in the electorate, but unfortunately The New York Times has blinders on when it comes to polls – only theirs are worth mentioning.

While the Times tells us, for example, that this is the first time since the primaries that Romney has an edge over Obama (leading the president by one percentage point), other polls tell a different story. Gallup had Romney up by two points in June and Rasmussen had him up by four points about the same time period. But the Times didn’t see fit to acknowledge those results.

Of course, still other polls in June showed Obama ahead, by anywhere from one to thirteen points (also not mentioned by the Times). The issue is not that polls conflict, but that the Times (as well as other media organizations with their own polls) treat only their polls as news and weave long anecdotal explanations for their results – even as other media polls show contradictory results. Fox, for example, showed Obama leading by four points over virtually the same time period as the latest CBS/NYT poll, undercutting the Times’ analysis that Romney was ahead for the first time since the primaries.

When it comes to covering the beat of public opinion, even for such an august publication as The New York Times, normal journalistic standards take a beating. It’s not “All the News That’s Fit to Print,” but “Only the Polls That We Conduct.”

This practice means that these media organizations are essentially creating news rather than reporting it.