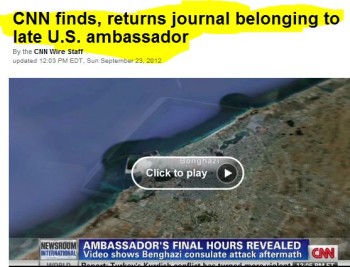 Politico explained that CNN reported on content from the journal Sept. 19, but it wasn’t until Sept. 21 that CNN’s Anderson Cooper said its original source for that report was the journal which CNN said it “found on the floor of the largely unsecured consulate compound where he was fatally wounded.”  The Sept. 23 CNN report on the journal, “CNN finds, returns journal belonging to late U.S. ambassador,” notes that “the journal consists of just seven pages of handwriting” and CNN “took the newsworthy tips” it found in the journal “and corroborated them with other sources.”

The State Department’s Philippe Reines issued a statement about CNN’s reporting accusing CNN of invasion of privacy and breaking “its promise to the family” of Stevens, according to the Huffington Post.  Reines said:

“What they’re not owning up to is reading and transcribing Chris’s diary well before bothering to tell the family or anyone else that they took it from the site of the attack. Or that when they finally did tell them, they completely ignored the wishes of the family, and ultimately broke their pledge made to them only hours after they witnessed the return to the Unites States of Chris’s remains.

“Whose first instinct is to remove from a crime scene the diary of a man killed along with three other Americans serving our country, read it, transcribe it, email it around your newsroom for others to read, and only when their curiosity is fully satisfied thinks to call the family or notify the authorities?”

But, CNN responded by arguing the journal was newsworthy, saying in part to Reuters

“We think the public had a right to know what CNN had learned from multiple sources about the fears and warnings of a terror threat before the Benghazi attack which are now raising questions about why the State Department didn’t do more to protect Ambassador Stevens and other U.S. personnel.”

Further, CNN added to Politico that it “ultimately reported Friday on the existence of the journal was because leaks to media organizations incorrectly suggested CNN had not quickly returned the journal, which we did.”  CNN said it handed the journal over to “a third party” for Stevens’ family “within less than 24 hours” and that “Out of respect to the family, we have not quoted from or shown the journal.”

We’re writing to the State Department for further comment and will update with any response.

We wrote yesterday about the U.S. Embassy in Algiers’ claim that Algerian newspaper Ennahar ran a fake photo of Stevens. The newspaper defended the photo.