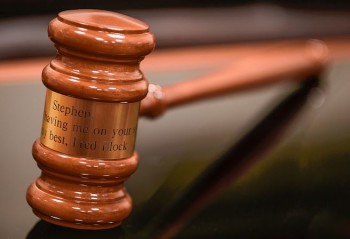 One KARE statement in question is “[Decker] was the good guy last night going to check on someone who needed help. That someone was 34-year-old Ryan Larson who investigators say opened fire on officer Tom Decker for no reason anyone can fathom.” Larson is also upset about a St. Cloud Times story saying “police say Larson is responsible for the shooting death,” the Associated Press reported.

Decker was killed in November 2012 when making a welfare check on Larson. Larson was arrested the day after but not charged in Decker’s death, the Associated Press reported, noting “police later named another man who killed himself in January 2013 as the likely murderer.”

Larson’s jury trial for defamation against KARE-TV and the St. Cloud Times begins Nov. 7. His lawyer argues that the reporters “did more than report facts from law enforcement” and “invented their own version of the facts that fit with the story they wanted to broadcast and publish about Larson.” iMediaEthics has contacted his lawyer for comment.

The news outlets defend their stories as fair reporting of law enforcement information.  iMediaEthics has written to both outlets for comment and to see if Larson attempted to get corrections before suing.

A separate Associated Press story noted that Larson “reached undisclosed settlements in earlier defamation claims against KSTP-TV, KSTC-TV, and WCCO television and radio.” iMediaEthics has written to these outlets to confirm.