Why does Alan Dershowitz wants anti-semitic cartoon of him in U Of Cal Berkeley paper to stay published? - iMediaEthics

Why does Alan Dershowitz wants anti-semitic cartoon of him in U Of Cal Berkeley paper to stay published? 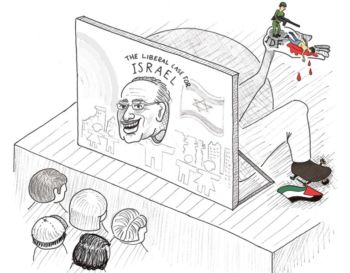 The Daily Californian, the student newspaper for University of California-Berkeley and for the wider community, unpublished an anti-Semitic cartoon of Alan Dershowitz, but the famed Harvard law professor emeritus wants it to stay published. Why? iMediaEthics interviewed Dershowitz by phone after reading his published letter to the editor calling for the paper to “be held accountable” and “justify themselves.”

The cartoon showed Dershowitz with his head through a sign reading, “The Liberal Case for Israel.” Behind the sign, his foot is stepping on a person holding a Palestinian flag, and his hand holds a member of the Israel Defense Forces killing a person.

The editor, Karim Doumar, tried to excuse the cartoon blaming Dershowitz for being a hypocrite in his views at the lecture, but in a phone call with iMediaEthics, Dershowitz challenged “four editors and the cartoonist” to prove how they knew if his lecture made him a hypocrite, if the cartoonist and no reporters were there. He asked them to indicate in the numerous crowd photos that a student paper journalist or artist was there, he said. He said he has not gotten a response or heard from the paper at all, and iMediaEthics asked editors why.

“The cartoon resembles the grotesque anti-Semitic blood libel propaganda splashed across Der Stürmer in the 1930s, which depicted Jews drinking the blood of gentile children,” Dershowitz wrote in his letter to the editor, adding that the cartoon is “a hard-left Neo-Nazi expression,” and “It is shocking that this vile depiction was published in Berkeley’s paper of record.”

Late this week, on Oct. 27, Doumar, the Daily Californian editor, published a lengthier editor’s note retracting the cartoon and admitting it “hearkened to clearly anti-Semitic tropes” and was “unacceptable.” iMediaEthics has asked Doumar what changed in the two days between the paper’s defense of the cartoon and decision to retract.

“We apologize to our readers and members of our staff who were hurt by the cartoon,” Doumar wrote. “We especially apologize to Alan Dershowitz for the ways it negatively impacted him both personally and professionally.”

UC Berkeley’s chancellor Carol Christ also slammed the cartoon in a letter to the editor calling it “offensive, appalling and deeply disappointing.”

“I condemn its publication,” Christ wrote. “Are you aware that its anti-Semitic imagery connects directly to the centuries-old ‘blood libel’ that falsely accused Jews of engaging in ritual murder? I cannot recall anything similar in The Daily Californian, and I call on the newspaper’s editors to reflect on whether they would sanction a similar assault on other ethnic or religious groups.”

With contributions from Rhonda Roland Shearer

Why does Alan Dershowitz wants anti-semitic cartoon of him in U Of Cal Berkeley paper to stay published?