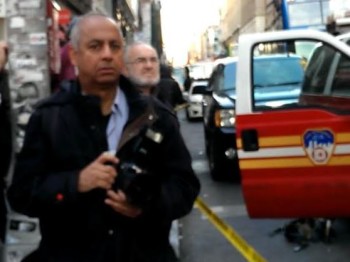 Today is the anniversary of Ki-Suck Han’s controversial death after the Queens man was pushed onto the cold, dark Times Square subway tracks. Questions remain about New York Post photographer R. Umar Abbasi’s choice that day to take photographs of the unfolding tragedy instead of attempting to rescue Han. Abbasi’s pictures and account of the moments before Han was fatally crushed by a train showed him at the scene where he claimed flashes from his camera were warning the train engineer, not snapping dramatic news photos that would be later capitalized into a New York Post front page.

But, while media outlets were publishing and discussing photojournalism ethics, and disturbing photos of Han’s last seconds of life on Dec. 3, 2012, many (including iMediaEthics) got one big thing wrong — the spelling of Han’s name.

After seeing the Los Angeles Times’ transparent correction of its articles, iMediaEthics made multiple calls to the New York Police Department’s Office of the Deputy Commissioner of Public Information to fact check Han’s name.  Police Officer Markowski told iMediaEthics Dec. 6 that Han’s name was spelled Ki-Suck Han, and we posted corrections on our articles.

Our correction, posted on three of our reports, reads:

Last year iMediaEthics tracked articles by major media outlets to see who got Han’s name spelled correctly, who got it wrong, and how those with the wrong spelling would handle the error. We focused on 20 news outlets and reviewed how they spelled Han’s name. Some outlets misspelled Han’s name originally, but rowed back later reports to fix Han’s name without publishing a correction. We reached out to them all for corrections at the time.

New York Post Got the Scoop, and Got the Misspell-Ball Rolling

The New York Post , which launched the story with its front-page photo of Han moments before his death, also appears to have launched the inaccurate spelling, Ki-Suk Han. The Post also wrongly used Ki Suk Han. The Post was still using the inaccurate spelling in articles as recently as Nov. 23, 2013. The Post has gotten the spelling correct, using Ki-Suck Han in a January article and ina Dec. 6 article on Han’s funeral.  (In March 2013, the Post used the spelling Ki Suck Han, citing court documents filed by Han’s family.)

But the Post was not alone.  Numerous outlets misspelled Han’s name – most misspellings were either Ki-Suk or Ki Suk.

Many news outlets including Slate and National Public Radio quickly responded to our inquiries and fixed the spelling of Han’s name. Others ignored our requests, and our recent follow-ups.  Some fixed the error but didn’t publish a correction. See below our findings.

Surprisingly, the Los Angeles Times, whose transparent corrections of its misspellings of Han’s name alerted iMediaEthics to the issue, ended up not giving us any information about its error or correction – namely, how it learned of the error and how it verified the spelling to begin with.  The Los Angeles Times correction read:

How the New York Times Got it Right

The New York Times, which appears to be one of the only outlets to get Han’s name spelled correctly from the beginning, opened up and explained its reporting and verification process to iMediaEthics.  Night Metro Editor Peter Khoury quickly responded to our inquiry last year asking how the Times got the correct spelling. According to Khoury, the Times verified the spelling with the police and public records. Khoury wrote:

“The original report from the police had the name spelled Ki-Suck Han. Another source also provided us with the same spelling, and public records supported that spelling.

“The next day, some media had it spelled Suk. Wendy Ruderman, our police bureau chief, checked again with the police department’s public information office and its chief spokesman, Paul J. Browne. They both confirmed that we had the proper spelling.

“The following day, Mr. Han’s family held a press conference and put out a release that spelled the name ‘Suck.’ And that was that. Others corrected themselves.”

In a Dec. 3 article, the Daily News totally botched his name, calling him Han Ki Suk. Then in a caption, Han was named Ki-Suk Han. In another article, a caption for a photo of Han named him as “Han Ki Suk.” Then just four short paragraphs later, the Daily News called the victim “Ki-Suk Han.”

Then, the Daily News used a third wrong spelling in a Dec. 5 article on  the family of a woman killed in 1999 in the subway. In that article, the Daily News said Han’s name was Ki Suk Han.

In some cases, including the Erik Wemple blog and an Associated Press story on the Post’s website, the name was spelled correctly.  iMediaEthics asked where the Post got the inaccurate spelling and if it would correct.

The Washington Post’s Kris Coratti told iMediaEthics by email last year, “Thank you for pointing that out. We will look into it and likely get them corrected.”

Corrections were posted on the inaccurate spellings that iMediaEthics found. The correction notes read: “CORRECTION: A previous version of this post incorrectly spelled Ki-Suck Han’s name.”

“In the early days of the story, when we reported about it on Dec. 5, the victim’s name was being reported by AP, the New York Post and others as Ki-Suk Han or Ki Suk Han. In such cases where we’re drawing on material from other credible outlets, we rely on the AP as a primary source for such spellings.

“The subsequent reports that you point to, with an updated spelling, are from the AP; they post automatically as part of a wire feed. NPR hasn’t really covered the story since the Dec. 5 post on the Two-Way blog.

“Now that this has been called to our attention, we’ll go back and add a correction to the Dec. 5 blog post.”

“Correction at 3:20 p.m. ET, Dec. 13: In early reports, the victim’s name was reported as Ki-Suk Han. We originally used that in this post. Later, The Associated Press reported it had confirmed that his name is Ki-Suck Han. That was brought to our attention today. We’ve corrected the reference above.”

Slate also misspelled Han’s name as Ki Suk in its  Dec. 5 article, but after iMediaEthics reached out, Slate promptly posted a correction reading

Chad Lorenz from Slate’s corrections explained it got the inaccurate spelling from the New York Post. Lorenz wrote:

“Thank you for alerting us to this. It looks as though we relied on the New York Post’s spelling in our items about the accident (since our coverage was focused on the NY Post’s coverage more than the event itself), but we should have found the correct spelling among other news sources. We are going to be running corrections on any misspellings of his name on Slate.  Thank you again for writing in about this.”

Slate’s also corrected its Dec. 4 post and placed a Dec. 13 correction note on the article. And, the two corrections were posted in Slate’s Dec. 14 corrections report.

“Anger at New York Post cover photo of subway passenger seconds from death and Was it wrong to publish photos of the man who died on the New York subway? Of course! were amended to correct the spelling of Ki-Suck Han’s name.”

Correction notes at the bottom of  the two articles read:

“This article was corrected on 14 December 2012 because the original misspelled Ki-Suck Han’s name as Ki Suk Han.”

“During interviews with the family in the wake of this tragedy, they indicated to our reporter a preference for the Ki-Suk spelling for Mr. Han’s first name.  Given their wishes, we decided to use that spelling, even though the police were using Ki-Suck.  We have gone through our sites to fix any past references and if we inadvertently missed some, we will correct them.”

The Chicago Tribune used the spellings Ki-Suk Han, Ki Suk Han and Ki-Suck Han in articles on its website.

“I’m the copy chief for Metro at the Tribune and am not involved in national/foreign coverage any longer. I can tell you in general terms that we try to follow AP spellings in the print editions, and that AP sometimes changes spellings after initial reports change. I also can tell you that much of what goes up on our website comes directly from news service feeds — could be Reuters, AP, LAT or other sources — and that can account for varied spellings online.”

Chicago Tribune‘s Media On Demand’s Colin McMahon bounced us to Reuters for more information because the Tribune “used Reuters for coverage of that story.”  Suzannah Gonzales, Thomson Reuters’ Assignment Editor, said “I will forward your query to the appropriate people at Reuters.” We never heard back.

Voice of Russia used the incorrect Ki Suk Han in two articles. Voice of Russia’s Letters Department’s Elena Osipova told iMediaEthics thanked us for letting Voice of Russia know about the misspelling and said “Hopefully, the text will be immediately corrected. ”

When iMediaEthics checked the two stories Dec. 19 we noticed the errors had been scrubbed with no correction notices. We asked Voice of Russia for transparent corrections. Osipova told us:

“Unfortunately, at this point it is next to impossible to trace the source of the error in spelling the name Ki-Suck Han, it’s possible that the source we used carried such a spelling, or it could be a mere typo, for which we are sorry.  Both texts you’ve sent the links to have been corrected as advised, and we thank you for bringing this matter to our attention.”

No responses from The Hollywood Reporter, the Drum, the Daily Beast, UPI