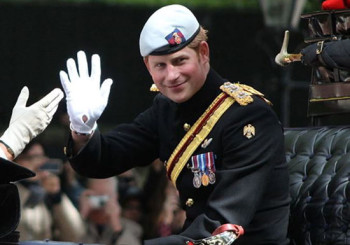 Prince Harry at Trooping the Colour, 2013 (Credit: CarFax2 via Wikipedia)

UK Sun reporter Jamie Pyatt defended paying two public officials for stories because he “firmly believed they were in the public interest,” the Guardian reported.

Pyatt has been charged with conspiracy to corrupt a public official for the payments and is on trial with five other Sun journalists. He denies the charges despite admitting payments to the two officials.

The police officer “was paid for stories, yes,” Pyatt said during the trial, according to the Guardian. Pyatt added that during his 27 years at the Sun, he only paid the two public officials for 24 stories out of the 10,000 or so that he wrote.

At the trial, Pyatt said he thought it was OK to pay a police officer if they initiated the transaction, but that he knew it was not OK to be the one to offer money. He  said, the Guardian reported:

“I always understood from when I joined the newspaper that that was the situation, that you could never make any approach to a police officer to offer money for a story as that would be against the law and would amount to corruption.

“However, if the police officer made the decision themselves to approach a member of the press, to sell in formation then you had not corrupted that officer.”

Specific stories Pyatt is accused of paying officers for relate to teenager Milly Dowler, who went missing in 2002 and was later found dead, and Prince Harry’s deployment to Afghanistan.

Pyatt denied Nov. 25 that he paid a police officer related to his April 2002 story “Milly: body found,” which falsely claimed Milly Dowler’s body was found, according to the Guardian. A body had been found but it wasn’t Dowler’s. She was later found dead in September 2002.

Dowler’s parents issued a statement read in Pyatt’s trial saying that the police had told the family the day before Pyatt’s story that the body had been found but it wasn’t their daughter’s. But, when the Sun published the story saying otherwise “we did not know what to think” Dowler’s father Bob Dowler said. The prosecutor said Pyatt did ask for money from his bosses to pay a “police contact” the day a body was found, the Guardian reported.

In addition to the claims Pyatt paid for the story related to Dowler, he is also accused of paying a soldier for “full debriefings” of what Prince Harry did when he was deployed in Afghanistan in 2007 and 2008, Press Gazette reported.

The Sun declined to comment to iMediaEthics as the trial is ongoing.