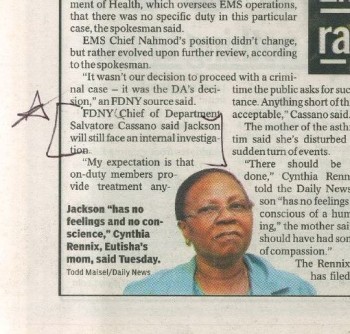 A scan of page 10 from the June 26, print version of the Daily News. FDNY Chief of Department is NOT Salvatore Cassano. He is a civilian and the Commissioner of the Fire Department of New York following a 2006-2010 term as chief. Starred black ink marks error.

The New York Times and The New York Daily News had errors in their stories about charges being dropped against Melisa Jackson, an EMT who refused to help a dying pregnant woman, Eutisha Reveé Rennix, while on a coffee break at a Au Bon Pain restaurant in Brooklyn, New York.

Jackson was asked to help Rennix, who was having difficulty breathing. She refused according to a January 20, 2010 New York Times article, “Back on Duty, but Under a Cloud After a Death.”  Rennix died of cardiopulmonary arrest.

Prosecutors ultimately dropped the case against her because she wasn’t assigned to an ambulance or a special event to offer aid under the “flag-down rule” that requires an on-duty EMT to treat a person in immediate assistance at all times, according to the New York Times.

How did Daily News reporters Oren Yaniv and Ginger Adams Otis’s June 25 story, headlined Charges dropped against EMT who merely called 911 as pregnant woman died,” mix up the Commissioner of the Fire Department of New York — Salvatore Casssano, a shorter man in a suit — with the very tall and lanky FDNY Chief of Department — Edward S. Kilduff, who wears a uniform with five well-earned stars?

But a quick fact check of the FDNY web site reveals: “Salvatore Cassano is no longer the Chief of Department at the FDNY. He was Chief of Department from 2006 through 2010, according to the FDNY’s website.  He’s the 32nd fire commissioner of New York.”

Jim Long, FDNY’s Public Information Director, told iMediaEthics that the Daily News has “gone through some changes,” in response to our questioning how the News reporters and editors could possibly confuse the Chief of Department and the Commissioner?

“They’re people in there that aren’t that familiar [with FDNY beat reporting],” he continued. “No, it’s not acceptable [but] they’re making mistakes on every level whether it’ll be the reporter level to the editor level.”

Even though The Daily News misidentified FDNY Commissioner Cassano in the print version; the online version was quickly scrubbed with no transparent correction notifying readers that the Daily News made the error.

iMediaEthics wrote to Oren Yaniv, one of the Daily News reporters who made the error, seeking transparent corrections online or in print.  We also asked if the error was an editing error or a mix up.

Yaniv, a reporter who covers Brooklyn courts and was apparently helping out with a FDNY EMS story, replied to iMediaEthics by email on July 11.

Yaniv suggested that iMediaEthics is wasting our time by asking him for a transparent correction of his error. Instead of answering the question, Yaniv said he “presonally” [sic] thinks a spelling error in our email was “an even bigger error” than he made in his published story and would be “embaressing” [sic] if we ended up publishing it in our final story about errors.

Below is one of iMediaEthics’ follow-up emails to Yaniv.

Below is the email from Yaniv. Yellow highlight added.

Compare Yaniv’s response to our question about his error being scrubbed online — without remedying it with a transparent correction–with how the New York Times responded to iMediaEthics flagging its EMS error.

Michael Schwirtz, a reporter for the New York Times, also wrote about the charges being dropped against EMT Melisa Jackson, who reportedly refused to help the dying pregnant woman. The New York Times’ headline for the story was “Prosecutors Drop Charges Against E.M.T.”

Like in the Daily News story, Schwirtz reported on June 25 that Jackson was arrested in Oct. 2010 with one count of official misconduct. Charges were dropped, after prosecutors determined that Jackson didn’t violate the “Flag Down Rule.” Jackson was working at the 911 dispatch center at the same location of the Au Bon Pain in Downtown Brooklyn in December 2009 when the woman suffered a severe asthma attack.

Schwirtz mistakenly wrote, “the 911 dispatch center, which is in the same building as the restaurant.”

In 2009, when the incident occurred, the Au Bon Pain restaurant was located in the same building at the FDNY’s Brooklyn headquarters for the 911 dispatch center, also known as the Emergency Medical Dispatch center. The center was moved between 2009 and 2010 from 1 MetroTech to 11 MetroTech, a quarter mile away, according to Long.

iMediaEthics emailed the New York Times correction desk to point out the error and ask if it was going to run a correction.

Flora Peir, Assistant Metro Editor of The New York Times responded to iMediaEthics by July 9 in an email, “We will run a correction in the newspaper at some point in the next few days.

The article has been fixed online.” The updated article states that “both were assigned to the 911 dispatch center, which at the time was in the same building as the restaurant.”

Check out the email from Peir, a world of difference from Yaniv’s email. For the Daily News’ Yaniv, iMediaEthics was wasting its time pursuing errors that were, without disclosure, covered up online with no correction. The Times’ Peir not only appreciated our “diligence” but wished us luck on our project, in addition to committing to running corrections both online and print.

Thank you for pointing out the error in our article about the EMT. We will run a correction in the newspaper at some point in the next few days. The article has also been fixed online. We appreciate your diligence and wish you luck on your project. I apologize for any perceived delay in addressing this matter – it took us longer than expected to find the correct link to the article in question.

See the online correction below.

We asked the New York Times when the print correction will run and will update any response.

Due to an editing error, the word in red font was missing (cut, and the “is” was added): “In 2009, when the incident occurred, the Au Bon Pain restaurant was located in the same building at the FDNY’s Brooklyn headquarters for the 911 dispatch center, is also known as the Emergency Medical Dispatch center.” We regret the error.