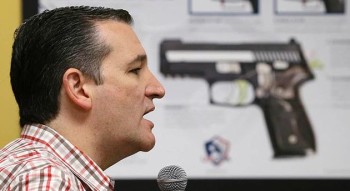 One of the photos of Ted Cruz standing in front of a gun poster. (Credit: AP)

Photos showing a gun pointed at U.S. Senator Ted Cruz have been taken down from the Associated Press after  complaints.

The AP said in a statement to Politico:

“Presidential candidate Ted Cruz was shown in a series of 14 photos taken by an Associated Press photographer at a ‘Celebrate the 2nd Amendment’ event Saturday afternoon, held at a shooting range in Johnston, Iowa. Five of the photos published by AP included images of guns seen on a wall in the background so that it appeared a pistol was pointed at Sen. Cruz’s head. The images were not intended to portray Sen. Cruz in a negative light.”

Conservative news outlet Breitbart noted June 22 that the photos were already gone from the AP website. AP spokesperson told Breitbart that the decision to delete the photos was “entirely an in-house decision.”

“The photos — taken by the AP’s Charlie Neibergall — caused a stir among conservatives who accused the news service of editorializing the gun violence issue,” Yahoo News reported.

In an interview on the Mark Levin Show, Cruz said, according to the Des Moines Register:

“There’s no doubt that if they had run the same photo and it had been Hillary Clinton or Barack Obama, that the entire world would have recoiled in horror and the editor who made the decision to run it would very likely have been fired and there would have been a public apology.

“You know, I’ve kind of enjoyed some of the contrast of all of the AP photos of Barack Obama with a halo of lights behind his head versus me with a giant gun pointed between my eyes because that sums up their views of you and me and conservatives and frankly of Americans. They view hardworking men and women all across this country — people who believe in the values, the Judeo-Christian values, the free market, people who believe in the Constitution — they view us as ignorant rubes and that’s their hostility coming out. That is the nature of who they are, they are partisans.”

The Register noted that its photographer at the event got a “similar photo.”