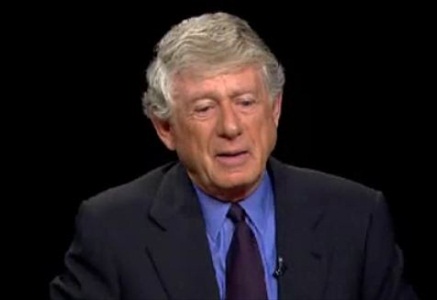 Koppel laid out his criticism of partisan media in a Nov. 14 article in the Washington Post. (StinkyJournalism is writing Koppel to ask about MSNBC’s more recent suspension of Joe Scarborough, another MSNBC anchor, announced two weeks later, Nov 19.)

After all, Olbermann is “the most opinionated among MSNBC’s left-leaning, Fox-baiting, money-generating hosts,” according to Koppel.

So, why suspend Olbermann, Koppel questioned. The years of objectivity on TV news networks are “a long-gone era,” Koppel wrote.

“When Olbermann draws more than 1 million like-minded viewers to his program every night precisely because he is avowedly, unabashedly and monotonously partisan, it is not clear what misdemeanor his donations constituted. Consistency?”

But, Koppel explained that he doesn’t think partisan news is good.  “The commercial success of both Fox News and MSNBC is a source of nonpartisan sadness for me,” he wrote, claiming that Fox News and MSNBC don’t even try to be objective.

Koppel further compared partisan news to Bernie Madoff’s investment schemes:  “They show us the world not as it is, but as partisans (and loyal viewers) at either end of the political spectrum would like it to be. This is to journalism what Bernie Madoff was to investment: He told his customers what they wanted to hear, and by the time they learned the truth, their money was gone. ”

Meanwhile, Koppel described network news from the 1960s as “more virtuous” because, according to him, the idea of making money off news wasn’t known yet.

Koppel also called for “clear, objective reporting” but claimed that the trend from objective to partisan news is “irreversible.”

“The need for clear, objective reporting in a world of rising religious fundamentalism, economic interdependence and global ecological problems is probably greater than it has ever been. But we are no longer a national audience receiving news from a handful of trusted gatekeepers; we’re now a million or more clusters of consumers, harvesting information from like-minded providers.”

Olbermann reportedly defended MSNBC’s “‘liberal with a small ‘l’ stance,” claiming that the network aligned politically that way “organically” and not for business motives. Olbermann also re-hashed “Koppel’s role in blowing up coverage of the Iran hostage crisis” but not doing the same to the Iraq war, according to Politico.

Time’s James Poniewozik added that Olbermann highlighted the “excellent and indisputable point that the bright line between the objective past and the subjective present is really not so bright and sharp.”

Poniewozik argued that journalists shouldn’t be labeling themselves objective but neutral.

Shafer noted that “In 2006, he penned a similar op-ed in the New York Times upon leaving ABC News after working there for 42 years. In both the Post and Times pieces, Koppel accuses the cable networks of giving audiences what they want instead of what they need to know because it’s the best way to secure advertising profits”

Shafer also countered Koppel’s claims that TV networks didn’t know they could make money off network news with a 1965 Time article reporting on the advertising revenues of an NBC nightly news show. He quotes Michael J. Socolow‘s paper in the academic journal, Journalism. Socolow teaches at University of Maine. He writes:

[B]roadcast journalism, historically, has played a direct—and at times central—role in increasing the profitability of  American network broadcasting. …

The idea of the philanthropic news division continues to be propagated because network journalists—and their employers—derive benefits from its public dissemination. It allows journalists to indulge in jeremiads about the decline of journalistic standards and the intensity of contemporary corporate pressure. Like all jeremiads, it calls upon a community to restore supposedly timeless values. The myth legitimizes a normative vision of professional broadcast journalism in the United States as protected, disinterested, and independent. [Emphasis added.]

Shafer concludes it a “myth that network news didn’t make money owes its origin to artful bookkeeping, Socolow informs us.”