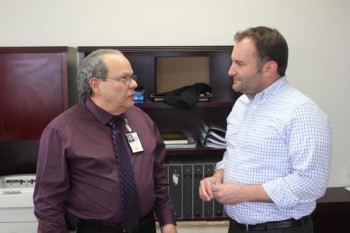 Texas Public Radio aired a hoax story last week after a man named Victor Martinez lied to them about his military past.

On May 13, Texas Public Radio reported on Martinez’s story about his alleged military past, which he told to NPR’s David Greene, who was visiting the state affiliate.

Martinez said that during his second tour of Iraq he “was the First Sergeant in charge of 350 soldiers” in the combat stress control unit. Martinez said that his wife mailed him CDs of Greene’s NPR program which he would listen to when he was “really in bad shape.”  He then gave Greene a coin from his service.

The story was touching, but not true.

But on May 19, TPR issued a retraction and reported that Martinez admitted he made up the story.

TPR said they looked into Martinez’s story after the fact and found out he was in San Antonio when he said he was in Iraq.

“We soon discovered a problem with Martinez’ story. His claim of service in Iraq in 2012, should have been a red flag because the U.S left Iraq in 2011,” TPR  reported.

When confronted, Martinez admitted he made up the story, according to TPR.

“No I did not go to Iraq,” TPR quoted him as saying. “No, I fabricated that.”

Martinez apologized for his “moment of weakness.”

“I’m so so sorry,” he told TPR. “I mean, it’s been a disservice and I do apologize, profusely, for just a matter of one moment of weakness as far as my integrity, which I have never practiced before in my whole, entire life. And I do apologize to the TPR public for having done this. I am so sorry. I am.”

TPR admitted that it should have done its “due diligance” to fact check Martinez’s story.

iMediaEthics has written to Texas Public Radio for more information about this incident.

We’re reached out to the Veterans Administration in South Texas to request comment from Martinez.

NPR directed our inquiry for comment to Texas Public Radio.