The Atlantic Takes $ from Scientology for Advertorial that Looked Just Like 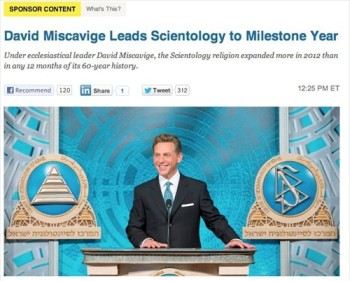 The Atlantic apologized this week and unpublished a Jan. 14 advertorial promoting Scientology.  The advertorial — an article in the style of a news article — was titled “David Miscavige Leads Scientology to Milestone Year: Under ecclesiastical leader David Miscavige, the Scientology religion expanded more in 2012 than in any 12 months of its 60-year history.”

It does include a tag that it is “sponsor content” but it could easily be mistaken for a real Atlantic article, given that the ad is shown with the same style and page layout as a news story, based on the screenshot posted by Gothamist.  The entire screen shot was captured by Alexis Madrigal [via TNW], as acknowledged by Gothamist,  and is posted at the bottom of the Gothamist report.  It is worth seeing to be astonished. There are colorful images showing 12 “unprecedented” church openings among 30 that have “risen on the planet” with tight crowd shots. iMediaEthics wonders how the Atlantic could have ever consented to this ad.

Also, at the bottom of the advertorial, before the comments section, there is a note reading: “Sponsor content presented by The Church of Scientology.” See screenshot below:

Comments posted on the article were “a bit skewed in the direction of Scientology,” the Washington Post’s Erik Wemple noted, pointing to three comments praising Scientology’s success.  A selection of all nine  comments shown in Gothamist’s screenshot from the advertisement all compliment Scientology. Check out below some of the comments.

See some of the comments on the Scientology advertorial. (Credit: Atlantic via Gothamist, screenshot, highlight added)

Because of the incident, the Atlantic said it was going to “review” its “policies that govern sponsor content and subsequent comment threads,” the Next Web noted.

And in an un-signed “Statement from The Atlantic” admitted publishing the advertorial was a “mistake.” The statement reads:

“We screwed up. It shouldn’t have taken a wave of constructive criticism — but it has — to alert us that we’ve made a mistake, possibly several mistakes. We now realize that as we explored new forms of digital advertising, we failed to update the policies that must govern the decisions we make along the way.  It’s safe to say that we are thinking a lot more about these policies after running this ad than we did beforehand. In the meantime, we have decided to withdraw the ad until we figure all of this out.  We remain committed to and enthusiastic about innovation in digital advertising, but acknowledge—sheepishly—that we got ahead of ourselves.  We are sorry, and we’re working very hard to put things right.”

The Atlantic’s national correspondent James Fallows, who noted he is only “an observer” of the incident and had “nothing to do with any part of” the ad or apology, added in his own post about the advertorial that it “was a mistake in both concept and execution.”

iMediaEthics has written to the Atlantic asking what the “review” of “policies that govern sponsor content and subsquent comment threads” will include and who decided to have the advertorial taken down. We’ll update with any response.

iMediaEthics wrote earlier this week about criticism of the Chicago Tribune for its wraparound advertisement promoting The Book of Mormon. Check out all of our stories on advertising and media ethics.