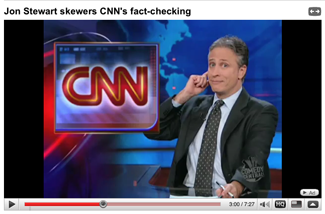 In this Youtube video, Jon Stewart makes fun of CNN for fact-checking a comedy sketch on Saturday Night Live while failing to fact-check real facts.

In a funny sort of parody sandwich, The Daily Show with Jon Stewart found itself fact-checking CNN this week after CNN broadcast a segment highlighting Politifact.com’s fact-check of the late night comedy show Saturday Night Live.

It all started when Saturday Night Live broadcast a segment poking fun at President Obama’s progress (or lack thereof) on a number of fronts.  Politifact.com fact-checked the SNL skit, and CNN featured the Politifact analysis in a fact-checking broadcast.  Now, The Daily Show has attempted to show CNN a taste of their own medicine. The result is a comedic picture of a news organization that misguidedly goes to the trouble of fact-checking comedy while all too often avoiding such rigor with its own network’s news reporting.

Stewart’s report first mocks the inherent silliness of a serious news agency fact-checking a late night comedy skit.  As demonstrated by past segments that Stewart shows–like one featuring a black Mister Rogers or another about a candy-gram-delivering shark–SNL rarely deals in anything close to hard facts.  So, how could it possibly be appropriate to fact-check them? Stewart asks.

More embarrassingly, The Daily Show then puts together a hilarious montage of CNN clips featuring guests who are allowed to cite false statistics and spout untruths, without any factual push back from CNN anchors.

In one, Arizona’s Republican Senator John Kyl says that “$100 to $200 billion” could be saved with effective medical malpractice reform.  CNN’s John King responds  “We’re out of time on this thing.”

Stewart then quotes a report from the Congressional Budget Office that says that malpractice savings would only amount to “about $11 billion in 2009… $54 billion over the next 10 years.”  Senator Kyl couldn’t be more wrong on his “$100 to $200 billion” assertion, yet he meets no resistance and certainly no fact-checking from CNN.

In another clip, Stewart shows Tony Perkins of the Family Research Council saying “30 million–whatever, the number keeps changing–of uninsured Americans… 5 to 10 million that can’t afford health care.  I mean out of a nation of 330 million of people that is a really small percentage.”

Had CNN been fact-checking here, they would have been compelled to remind Mr. Perkins that, according to the U.S. Census, America actually has a population of about 307 million people currently, Stewart says, joking “you’re only off by a factor of Australia.” (Australia’s population is approximately 22 million).

In response to an assertion by Utah’s Republican Senator Orrin Hatch that “Until they finally get us to the point where you have socialized medicine, and if that happens, the greatest country in the world… is going to be deeply, deeply harmed,” CNN responds that they are going to have to “leave it there.”

“Why would you leave it there?” asks Stewart.  “There is a terrible place to leave it.”

In some ways, Stewart is right on this.  It is the ethical responsibility of journalists precisely to not ‘leave it there’ if leaving it there means that a false statement is being presented in the news unchallenged or without proper context.

Yet that same phrase repeats over and over in a montage of CNN clips.  “That explains CNN’s new slogan,” Stewart jokes.  “CNN, Nobody Leaves More Things There.”

Clearly, these examples were cherry-picked by The Daily Show to prove their point and to further the comedy. They are not, hopefully, representative of the whole of CNN’s news reporting history.

Really, news networks can’t be expected to be absolutely perfect in this respect. In live broadcasts, unsubstantiated statements are bound at times to be left hanging due to time constraints. (Sometimes a broadcast really will have to ‘leave it there.’)  But what should happen in such cases is a good follow-up report or a reopening of the issue in a later broadcast where the real facts can be presented.

In the end, the troubling number of fact-checking failures the Daily Show has dug up in this segment at least raises an important question—as we try not to ask too much of CNN or other broadcast news, do we also risk not asking enough?