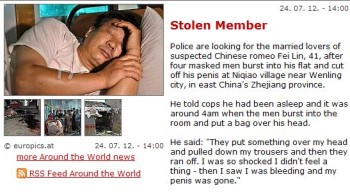 The Huffington Post recently published an article on a man’s stolen penis that lacked proper sourcing. The Huffington Post seemingly recognized it had a sourcing problem and corrected without properly disclosing the changes. The publication’s adding of links to the original story did not address its having lifted the Austrian Times article in the first place.

The story was originated by CEN/EROPICS.  Interestingly, both CEN/EUROPICS news wire and the Austrian Times are owned and edited by Michael Leidig.  Leidig told iMediaEthics in late July that

“It is a constant problem here – we originate material and three translations down the line it ends up on the Huffington Post.”

The report tells the story of the Chinese man Fei Lin who was reportedly assaulted by several attackers. One evening, while Lin was sleeping four masked men broke into to his home and cut off his penis for allegedly having affairs with married women. The Huffington Post’s attention-grabbing story elicited more than 2,100 comments and 17,400 shares on Facebook, but tracking down the report’s sourcing was like squeezing water from a rock and revealed a multitude of ethical questions.

When The Huffington Post first published its titillating July 24 story, Fei Lin’s Penis Stolen By Thieves, it made only two mentions of sourcing:

First, the Huffington Post report attributes some information to a CEN/EUROPICS photo caption:

“Fei Lin, 41, of the Niqiao village near Wenling City, in east China’s Zhejiang province, told police he was asleep when the thieves burst into his room and put a bag over his head,according to a photo caption sent to The Huffington Post by CEN/EUROPICS,”

One problem: Huffington Post didn’t link to a CEN/EUROPICS story.

Leidig’s reporter originated the account of the stolen penis; however, The Huffington Post played three-card Monty with its sourcing, only crediting CEN through a photo caption.

Magically, The Huffington Post seemed to divine the details of the story from CEN’s photo caption. Where did the rest of the information come from?  And, the phrase “sent to us” is misleading, it should say “according to a story we did not pay for that was attached to a photo we did buy from CEN/EUROPICS.”

The second source cited by The Huffington Post was a link to Fark Headline: Man has penis stolen by masked intruders.

The Fark link directs to a July 23 story by London daily tabloid newspaper the Daily Star. According to Fark’s FAQ, “Fark.com, the Web site, is a news aggregator and an edited social networking news site.” As a news aggregator, Fark publishes other publications’ headlines and links to original stories, but in this case it did not write its own headline, as The Huffington Post implied with its link.

The Daily Star is a London daily tabloid newspaper (think the National Enquirer) and is now apparently an aggregating source for The Huffington Post. Or maybe not.

Buried in the Daily Star article is a link to an Austrian Times article “Stolen Member” — the same outlet owned by CEN/EUROPICS owner Michael Leidig.

The Huffington Post likely realized its serious sourcing issue and republished its story the next day to include three sources — without disclosing the changes. We have reached out to The Huffington Post for comment and will update if there is any response.

See below the original version of the Huffington Post article.

Compared with the updated version.

“Police believe the attackers were jealous lovers of several local women whom Lin was having affairs with.”

“Police believe the attackers were jealous lovers of several local women whom Lin was having affairs with, the Austrian Times reported.”

“Emergency workers and police searched for Lin’s anatomy but turned up nothing.”

“Emergency workers and police searched for Lin’s anatomy but turned up nothing, according to TNT Magazine.

The TNT Magazine article was published July 25th, one day after The Huffington Post’s original article, so it could not originally have been a source. Unless of course the reporter is psychic, a popular information source for the Daily Star.

Fark.com is completely removed as a source for this story; it doesn’t even get a hat tip after the rewrite.

The Huffington Post has a long (and controversial) history of aggressively aggregating stories. Leidig, CEN’s founder and owner, responded with no surprise to our inquiry. After all, just last year, iMediaEthics reported on a similar situation between Huffington Post and CEN where CEN billed Huffington Post for taking its reporting.

“told cops he had been asleep and it was around 4am when the men burst into the room and put a bag over his head.”

“Emergency workers and police searched for Lin’s anatomy but turned up nothing.”

Another 17 words are replacement words — i.e. “penis” instead of “organ,” “police” instead of “cops,” “Lin’s” instead of “his” — which makes it an 80% match. Ignoring the 12-word crediting phrase “according to a photo caption sent to The Huffington Post by CEN/EUROPICS” brings the word count to 137 words and a matching rate of a shocking 87%. (We acknowledge this may not be an official method of comparing articles for plagiarism but still find it interesting.)

The Daily Star is More Ethical than The Huffington Post?

Even though The Huffington Post paid CEN/EUROPICS for use of a photograph and its caption, it lifted the information from the caption and used it in the article, a practice that seems questionable. The photo caption was also the only published source, a reference later removed entirely from the Huffington Post‘s report. Then The Huffington Post re-wrote the rest of the story it never paid for.

Compare that to the Daily Star, home of alien invasion scoops and stories about turning the site of the Chilean mine disaster into a theme park. It paid CEN/EUROPICS for use of the July 23rd stolen penis story, Leidig told iMediaEthics, writing:

“The Daily Star has a contract with us when they use all of our content for an agreed arrangement. The Huffington Post also paid for the photograph but they did not pay us for the story.”

And Greg Heffer, writing for the Daily Star, even reworked some of the story in his own words (although it is admittedly still quite similar).

It’s hard to say which is more embarrassing for The Huffington Post: aggregating content from the Daily Star and trying to hide it, or being shown up ethically by a London tab? Tough choice.