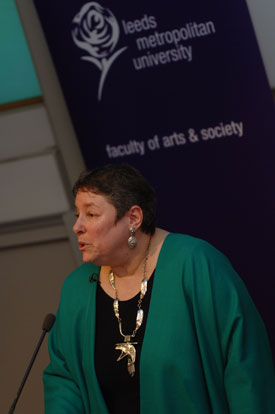 The New Media Nation, the latest book by Valerie Alia, a journalist and professor of ethics, identity, and the politics of naming focuses attention on Indigenous media and the ethics of reporting on Indigenous people.

As Alia has pointed out before, misconceptions about Indigenous people run rampant across the media landscape. In a 2009 essay for iMediaEthics, Alia offered a couple of examples of how the mass media has exploited Indigenous media by presenting portraits of “filthy,” “exotic” and “primitive” people.

Diversity in media ethics is an important and timely topic.  But, because mass media’s coverage of Indigenous people is sometimes exploitative and stereotypical, the promotion of media run by Indigenous people can serve as an alternative. Alia’s New Media Nation details how Indigenous people are maintaining their cultures through their own media.

As a recent example of inaccurate reporting on indigenous people, Jared Diamond stated in an April 2010 UCLA speech that “there are only two Indian languages in the U.S. that have regular radio broadcasts — Navajo and Yu’pik Eskimo.”  Alia explained to iMediaEthics that “the language nest program is massive, and there is a good deal of Native American leadership in both language education and Native language broadcasting.”

Calling for Diamond to back up his claim with sources, Alia noted that “the Lummis (Coast Salish people in northern Washington state) have a university and other educational programs, and Lummi language broadcasts.  And the Hopi radio station is a major deal — in a community that has long been known for preserving and protecting its language and culture.”

Alia has worked since the mid-1950s researching, studying and working in the fields of Indigenous people, ethnic minorities and media. She brings her background in both journalism and Indigenous identities to bear in The New Media Nation.

Technically retired, Alia is working in photography, consulting and mentoring and not currently conducting any major research.

iMediaEthics spoke with Alia by phone last fall, at which time she explained that she “found journalism by accident.”   Likewise, it was an accident she “ended up in the Arctic.” (She currently resides in British Columbia).

Alia, who completed her doctorate on the politics of naming – a discipline she developed, explained to iMediaEthics :   “I have two streams.  I work on identity and media, and I got kind of pushed into teaching journalism because it was considered rare to have both journalism experience and a Ph.D.”

Alia’s most recent book, The New Media Nation: Indigenous Peoples and Global Communication (Anthropology of Media), was published by Berghahn Books in 2010.

New Media Nation tells about how Indigenous people worldwide “are using old and new technologies to amplify their voices and broadcast information to a global audience,” the book’s back cover explains. “This is the first portrait of a powerful international movement that looks both inward and outward, helping to preserve ancient languages and cultures while communicating across cultural, political, and geographical boundaries.”

Alia told iMediaEthics that she had a few goals in mind for New Media Nation.  First, she wanted to “make people aware that there is this quite incredible global movement” of Indigenous media.  Second, she wanted to provide a “resource for other researchers.” And third, Alia wanted to “stimulate interest” in the area of Indigenous media.  “It’s an activist interest, as well as an academic interest,” Alia commented.

In New Media Nation’s opening notes, Alia explained a few terminology issues when it comes to writing about Indigenous people.  For example, “although many Indigenous organizations have veered away from Native, and many Native Americans in the US (and Indigenous people in other countries) find it offensive, it is still used widely in Canada.”

Also, Alia explained that Inuit is the plural form of Inuk.  Inuit is the “preferred” term in Canada and refers to “people whom outsiders used to call ‘Eskimos.'”

According to Alia’s book, Indigenous people are often portrayed in the media “in the language of conquest and colonization.”

Other Issues in Indigenous Media Reporting

Alia, who has worked with the Inuit and First Nations for decades, highlighted a few areas that are problematic in reporting on Indigenous media.

Some major issues in reporting on indigenous people, Alia explained, include when journalists present themselves “as global experts about other people’s lives without talking to the other people.”  Spending time in the field — a substantial amount of time — is important.

“People go in as tourists or touristic researchers,” according to Alia and after only meeting a few people, they leave the area and “tell the world what’ it’s like.”  But, you can’t really get a sense of a community after just a few encounters.  Alia said:

“It’s a joke in the Canadian Arctic in the Inuit communities….where you go out one day, you get an article. You go out a week, you get a book.”

It’s important for journalists to avoid assuming they can report on Indigenous media after just a short time in the area.  She commented that she reminds herself that “you need to know humility and to know your limitations and not try to be someone you’re not.”

“There’s an arrogance that I find unethical about presuming you can learn something that’s meaningful to tell people about patterns from very brief and very limited information.”

Problematic media reporting isn’t any new phenomenon though, according to Alia.  “Integrity isn’t about the 20th century or the 21st century or the Internet – although what happens with the Internet is that stuff goes out so fast that by the time you fact check, it’s often after the fact.  It spreads faster than ever before.  It’s a quantitative change.”

The biggest issue in media reporting on Indigenous people is “generalizing on very limited experience.”

As for Alia’s Arctic experience?  She first started “going into the Arctic” around 1983.  And yet she still considers herself a beginning learner, she said.  She recommends researching not only during the tourist season.

“But, The New Media Nation is not just about the Arctic, it’s global,” Alia explained.

Alia has also written an essay entitled “Jared Diamond in the Rough: Media, Misrepresentation, and Indigenous People” for iMediaEthics in part of our “Pig in the Garden” series on the flaws in Diamond’s journalistic work. (See Alia’s essay here.  See iMediaEthics’ complete “Pig in a Garden” series here.)

In her essay, Alia approaches Diamond’s April 2008 New Yorker article “Vengeance is Ours: What can tribal societies tell us about our need to get even?” from a media ethics and indigenous media ethics perspective. She contextualized Diamond’s report and showed other examples of flawed media reporting on indigenous people during the past 30 years.

Alia called Diamond’s research and assumptions “questionable” given that “his research seems to have consisted mainly of conversations with one man, Daniel Wemp, seven years earlier.”

“From questionable research, Diamond arrives at questionable assumptions about PNG cultures, politics and people as a foundation for large-scale theorizing about the nature and value of ‘vengaence.’ Patterns of revenge undoubtedly exist, but they are not the only patterns of human behaviour, or the only behaviour in Papua New Guinea.”

She further questioned the use of “real names” to identify people, and whether Wemp was informed and protected as a source.  Alia wrote of Diamond’s New Yorker article:

“The magazine’s distinction between journalism’s use of “real names” and science’s provision of anonymity is a red herring. First, it is inaccurate. Second, the most serious question is not whether Daniel Wemp was named, but whether he was accurately and directly quoted, was able to give informed consent, and in being named, was protected from harm to the greatest extent possible.”

Regarding an increased representation of indigenous peoples in the media, Alia also commented that she’s not seen any indigenous writers published in the New Yorker.

“Improving media representation is only half the picture.  I have yet to see a New Yorker story by an indigenous writer. There is a general absence of minority voices in major newspapers and magazines; radio and television stations; and local, regional, national, and international media-policy-making bodies.”

The Audience for Alia’s Book

The New Media Nation isn’t just for academics, according to Alia.

While the book is presented more in an academic fashion, she explained that she writes “in a journalistic style” and that “the book was intended to reach a wider audience” than just academics.  Specifically, she set out to reach journalists and Indigenous media people.

Alia’s latest book, The New Media Nation, was published in 2010, not 2009 as previously stated.