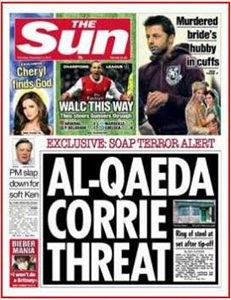 The Sun has apologized for its fake cover story about Al-Qaeda threats, pictured above from the Guardian's blog. (Credit: The Sun, the Guardian)

The Sun fessed up to publishing a fake story on its front page earlier this month, Roy Greenslade reported in the Guardian.

The Dec. 9 story asserted that “security was being ramped up for a pre-Christmas live episode [of a soap opera] because of” Al-Qaeda threats, the Toronto Sun noted.

According to The Spy Report, the story drew “immediate scorn from the public, other media outlets and the police.” The police reported called the story fake, as This is Lancashire reported.

Police superintendent Jim Liggett is quoted as saying at the time of the original story’s publication “I want to clarify that we have categorically not been made aware of any threat from Al-Qaeda or any other proscribed organization.”

The link for the Sun’s article appears to be dead, but a blog about the show, CorrieBlog.TV, picked up the story Dec. 9, noting that the Sun reported “Corrie stars will undergo full body searches with cast and crew passing through airport-style scanners before being frisked in security checks at the show’s studios.”

“FURTHER to our article about increased security at Coronation Street’s studios for their live 50th anniversary episode (December 9), we would like to make clear that while cast and crew were subject to full body searches, there was no specific threat from Al-Qaeda as we reported. We apologise for the misunderstanding and are happy to set the record straight.”

StinkyJournalism is writing to the Sun and Coronation Street for further comment. We will update with any response.

UPDATE: 1/4/11: 10:16 AM EST: Stuart King, Coronation Street’s publicity manager, responded to StinkyJournalism’s e-mail inquiry. He wrote:  “We will not be issuing a statement regarding the matter as it has now been resolved, however I have included a link to the Press Complaints Commission who dealt with this on behalf on ITV, they might want to comment further.”

StinkyJournalism has written to the PCC and will update with any response.

“The PCC seeks to resolve complaints where appropriate, and we are pleased that this case was settled to the express satisfaction of the complainant.”