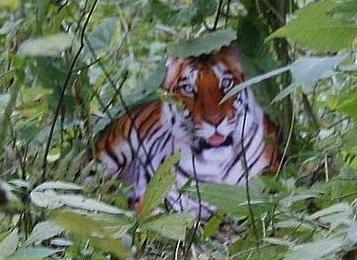 Zhou Zhenglong was put in jail for not reporting in with officials. Zhou's 2007 fauxtographs of this tiger (from a poster) in the wild sparked a three-year investigation, culminating in 13 reprimands or firings and his jailing.

Tiger fauxtographer Zhou Zhenglong, who created a national scandal two years ago with his faked photographs of rare tigers, was jailed for not following court instructions and properly checking in with Chinese authorities, Yahoo! News reported May 5.

The Wall Street Journal reported that the Chinese farmer said he was trying to track the tiger in the mountains when he violated his parole.  Zhou was picked up April 30, Sina reported.

The arrest comes just days after China’s State Forestry Administration announced the results of its three-year investigation into the matter.

The Straits Times reported that the tiger hasn’t been seen in the wild since 1964.

In 2007, Chinese farmer Zhou Zhenglong made headlines for his alleged photograph of an endangered tiger shown in Shaanxi Province.

Global Times reported that Zhou “claimed he risked his life and took more than 30 digital photographs of a South China tiger Oct. 11, 2007.”  China Daily reported Oct. 18, 2007 that only one of the photos was released to the public Oct. 12, 2007 by the forestry department of Shaanxi Province at a news conference.  But, “dozens of netizens expressed doubts” with the photo’s authenticity.

The Wall Street Journal’s China Real Time Report blogged May 6 that the “photos were authenticated and embraced by local officials who wanted to use them to boost tourism.”

Yahoo! News reported that local officials used Zhou’s photo “to promote tourism and a wildlife reserve, and rewarded him with 20,000 yuan ($2,930) before the fraud was exposed by local media and Internet experts.”

Global Times reported that a resident of Panzihua, Sichuan Province, exposed the fauxtograph when he noticed he had a poster of a tiger that looked a lot like Zhou’s photo.

Global Times reported that the Shaanxi Province Forestry Bureau maintained that the tigers might still be in the province in a Nov. 23, 2007 statement.  On Feb. 4, 2008, the bureau apologized and said it didn’t have “substantial proof,” Global Times reported.  On June 29, 2008, the bureau said all the photos were forged and Zhenglong was arrested.

StinkyJournalism reported Nov. 24, 2008 that Chinese courts decided instead to give Zhou a three-year reprieve and ordered him to return the cash reward.  Part of his reprieve required that he check in with officials, Yahoo! News reported.

Thirteen officials were reprimanded or fired for their roles in the fauxtography scandal, StinkyJournalism reported July 1, 2008.