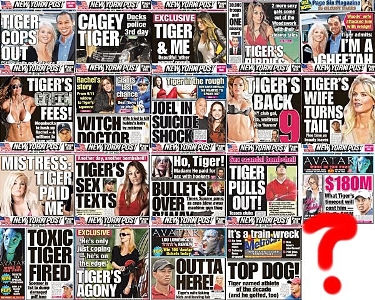 It looks like Tiger Woods has another trophy to add to the mantle above his fireplace. That is, the beleaguered professional golfing great just surpassed the 9/11 attacks for the longest consecutive string of New York Post cover stories.

The tabloid had featured Woods on the main cover (not the sports cover) for 19 straight days as of December 17, sports blog With Leather reported. Then December 18 marked the 20th cover in a row in the Post archive, before the spell was broken with a story on Copenhagen’s climate talks December 19.

The terrorist attacks on 9/11 garnered just 19 covers in a row, according to With Leather, which makes Woods the current record holder. A Nov. 27 car crash outside Woods’ home soon spiraled into weeks of media coverage of the golfer’s alleged affairs dominating many corners of the press, while other, arguably more important stories got the short shrift.

iMediaEthics explored the ethical issues of the Tiger Woods media “circus” in this post. Coverage of the scandal, beyond being excessive, has also risked reporting errors, unsubstantiated rumors and possible violations of Woods’ remaining shreds of privacy.

In regards to news value, there’s no doubt that the worst terrorist attack on U.S. soil > a golfing superstar stepping out on his wife, so what does this tell us about our current media climate?

I’d get on my soapbox about this, but all it would be is hypocrisy. The story has been page-view candy for us, the company as a whole and anyone else with a keyboard and a microphone to the world’s electronic ear.

Koster writes, though, that he’s sensing people may finally be fed up with “being assailed” by the Woods coverage. On December 19, the New York Post finally turned its cover over to the Copenhagen climate talks, and on Sunday featured a story on the foot-or so of snow dumped on New York overnight. Monday, the late actress Brittany Murphy was front and center. So far, it looks like Koster may be right that the fervor over Woods has finally subsided, at least on New York Post front covers.