1350 Complaints to BBC: Too much Nelson Mandela Coverage

1,350 Complaints to BBC: Too much Nelson Mandela Coverage 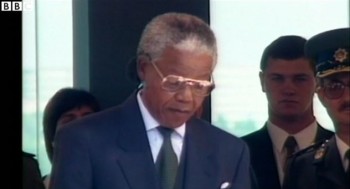 A screenshot from the BBC's coverage of Nelson Mandela (pictured)'s death. (Credit:BBC, screenshot)

The BBC received 1,350 complaints of disproportionate coverage over its reportage on the death of Nelson Mandela, according to Press Gazette

Viewers were upset over how much airtime Mandela’s death got compared with weather news. BBC News director James Harding apologized to viewers who felt they lacked the news they needed about local storms, but stood by the extent of the BBC’s Mandela overall coverage, the Guardian reported.

He said on BBC’s Newswatch:

“Nobody needs a lecture on his importance but we are probably talking about the most important statesman, the most significant statesman, of the last 100 years, a man who defined freedom, justice, reconciliation, forgiveness. The importance of his life and marking his death seems extremely clear to us.”

He also touted the BBC’s exclusive interview with former South African president FW De Klerk and pointed to the BBC’s radio and website as ways for viewers to get weather coverage, the Guardian added.

If you’re in the UK, you can watch Harding’s comments in response to complaints on the BBC’s website. (The BBC video is only accessible in the UK.)

1,350 Complaints to BBC: Too much Nelson Mandela Coverage