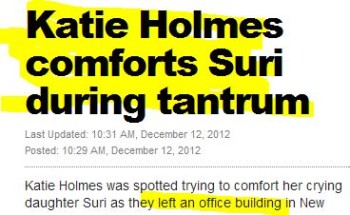 iMediaEthics has previously called out the Daily News for its speculative, source-less reporting in July on Suri crying.  In that case, the Daily News ran a front-page report claiming Suri was having a “puppy meltdown” because Katie Holmes wouldn’t get her a puppy.

The Dec. 12 story, complete with close-up photos, reported on Suri Cruise crying. Not at any media event, by the way — Suri was pictured with her mother outside an “office building.”  Even worse, the Post seemingly criticized Suri for crying, writing she is “often photographed throwing a tantrum.”

She’s a child. How is this news or fair?

But the Post isn’t alone in its questionable coverage.  Perez Hilton’s site Perezito’s called Suri a “little monster angel” and included a separate photo of Suri crying.
Noting “Suri Cruise always gets photographed to death, and she’s clearly made her point… no more photographs please!!” Perezito’s is certainly missing the point.