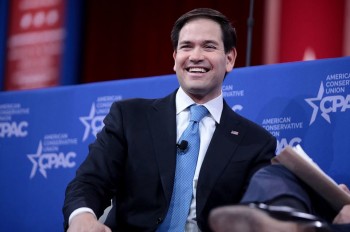 The New York Times is standing by its report on Marco Rubio and his wife’s traffic tickets despite questions about its newsworthiness and origin.

Acknowledging that the Times‘ story was “considerably less than earthshaking,” public editor Margaret Sullivan addressed concerns about the story’s origin and value. The June 5 story, “Rubios on the Road have drawn unwanted attention,” reported that the couple had received 17 traffic citations since 1997, but only four of them were the presidential candidate’s.

The Times denied to Politico that it got the information from American Bridge, which Politico described as “a left-wing super PAC founded by Hillary Clinton loyalist David Brock.” The Washington Free Beacon pointed out that the Miami-Dade County court records show American Bridge acquired the same records prior to the Times report and questioned if the PAC gave the research to the Times.

“We came across this on our own,” the Times‘ Washington bureau chief Carolyn Ryan told Politico, saying that Times reporters found it going through documents and got Westlaw Court Express to get the documents from the courthouse.

A Times deputy executive editor Matthew Purdy told Sullivan that even if the newspaper had acquired the information from an opposition research group, it would be OK. “It’s perfectly ethical to take information from anywhere and to check it out,” Purdy told Sullivan, emphasizing that the Times will review opposition research and not necessarily cover it.  Sometimes the Times will disclose to readers if they got a tip from someone with an agenda, based “on what the information is,” Purdy said to Sullivan.

“What’s important is that we’re giving you verified information. Our job is to take the agenda out of it,” he added. “Where the source is relevant, we should say so.”

In a follow-up blogpost June 13, Sullivan added that “I thought the traffic ticket story lacked sufficient newsworthiness on its own (that’s public editor speak for “why is this a story?”), and might have made a fine couple of paragraphs in the second story, which was much meatier.”