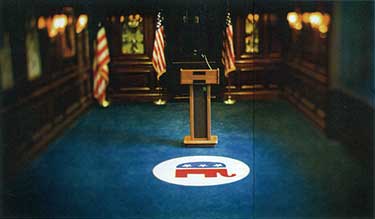 GOP DOLL HOUSE OR REAL ROOM? The May 18th issue of TIME Magazine examines the decline of the Republican party. The caption states, "Hallowed Hall: A room at the Republican National Committee is a shrine to the GOP's glory days--an increasingly distant memory." What the caption does not say is mysterious reason why the GOP podium looks toy-like and insignificant. It's a special effect, called tilt-shift photography. TIME editors used this technique to illustrate their point that the GOP may be disappearing. However, such an interpretive illustration that distorts size should be distinguished from photojournalism in StinkyJournalism's view. We believe the caption should have disclosed the tilt-shift effect or used the word "illustration" to inform readers. NOTE: The above photo and caption are from TIME's May 18th print version.(Brooke Kraft, TIME/Corbis)

Titled, “Endangered Species,” TIME magazine’s May 18th issue centered on the possible downfall of the Republican party. A two-page spread in the main story features a photo of a GOP room with a toy-like podium. The caption in the print issue says, “Hallowed Hall: A room at the Republican National Committee is a shrine to the GOP’s glory days–an increasingly distant memory.”

Those unfamiliar with tilt-shift photography will not realize that the sense of peaking into a dollhouse one gets in this TIME image of the GOP National Committee, is an optical illusion born from a special photographic effect that makes things in the distance appear small and insignificant, instead of just far away.

StinkyJournalism’s earlier report, discusses how tilt-shift photography’s optical distortions are easily used as undisclosed criticisms– making it important to reveal its use in captions.

For example, the above use of the technique in depicting the GOP room, and the resulting toy-like effects, reinforces TIME’s editorial point. The GOP podium and the room itself are literally disappearing into insignificance. The article only suggests that such a GOP size reduction is possible, but the tilt-shift photo distortions literally make it true.

This is editorial illustration, not objective news photography. TIME editors need to label such an image as an “Illustration.”

At least TIME’s application of tilt-shift editorializing has been used for both parties. Our first report on the technique involved a photo of Obama. He was made to look small (never a compliment) in a congressional session via tilt-shift.

The tilt-shift photo accompanies a TIME article and caption that suggests that congress is overwhelming Obama (making him small). The photo, by means of artificial distortions, expresses the editorial point of Obama’s potential insignificance by making it visually true. He looks like a toy-figure overwhelmed by the larger size of congressional members. Again, it’s an illustration and should be labeled as such, in StinkyJournalims’s view.

The online version of the above image has a confusing, and perhaps, even an unintentionally ironic caption, in light of the undisclosed tilt-shift photographic effects that make the podium appear doll-house-scale in size: “On View: A small collection of GOP memorabilia is housed in a room adjacent to the lobby of the Republican Party’s headquarters in Washington. The room is sometimes used for press conferences.”