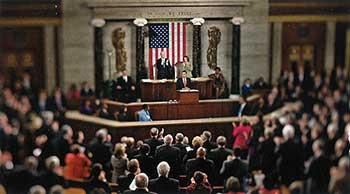 The May 25, 2009 issue of TIME magazine included the above "tilt-shift" special effects photograph by Corbis photographer, Brooks Kraft. StinkyJournalism asks: Since the public is so sensitive now about the use of photo deceptions in news photography, such as staging and Photoshop, shouldn't TIME magazine disclose the use of special effects, such as tilt-shift, as "photo illustrations" since it is simply not a matter of replicating human vision, or pointing and shooting a camera? After all, throughout the Internet, tilt-shift photography is called "faking" by those who advocate its use.

The photo of Obama speaking to Congress in TIME magazine looks strange [May 25, 2009, print only].

Obama appears toy-like and small surrounded by out-of scale larger congress members in a blurry circular haze –as if the viewer suffers tunnel vision. The article’s headline was “What is Obama’s Biggest Problem?” Congress was indeed looking large while Obama looked small. There is no caption that discloses “photo illustration” or special effects. Yet, I quickly reckoned this image as displaying an old, but now very hip, updated special effect, called “tilt-shift” photography.

The web site, TiltShiftPhotography.net, defines “Tilt-Shift Photography (Miniature Faking)” as “a creative technique whereby a photograph of a life-size location or object is manipulated to give an optical illusion of a photograph of a miniature scale model. Altering the focus of the photography in Photoshop (or similar program) simulates the shallow depth of field normally encountered with macro lenses making the scene seem much smaller than it actually is. In addition to focus manipulation, the tilt-shift photography effect is improved by increasing color saturation and contrast, to simulate the bright paint often found on scale models. Most faked tilt-shift photographs are taken from a high angle to further simulate the effect of looking down on a miniature. The technique is particularly effective on buildings, cars, trains and people.” Read more on tilt-shift imagery,  here.

This does not sound like a news journalism photo technique to StinkyJournalism. So I called the National Press Photographer Assn. (NPPA) ethics committee to ask what they thought of the use of tilt shift photography in news reporting. John Long, chair, said “It’s a hoola hoop.” “You mean a gimmick?” I asked. “Yes,” he said, “It’s going nowhere as a technique.” Long explained, “This technique would not be used for hard news. It’s not the right place for it.”

What about the TIME Obama photo? It seemed to Long that TIME was trying to make boring photos more interesting. “It’s not a documentary photo to begin with. It’s artsy.”

I also called TIME and spoke to the picture desk who confirmed the Obama image was a tilt shift photo. They assured me that no Photoshop was used to obtain the tilt shift effect, which, along with the in-camera techniques, is how the visual effect is generated. They also felt no need to label it a photo illustration, despite admitting using this disclosure in other cases.

Long said he agreed with not using the “photo illustration” label in this case, as he could easily tell the photo looked unreal or was misprinted. I countered that this was all the more reason that the Obama tilt-shift photo should be labeled “photo illustration.” The public needs clarity and disclosure when there are such clear departures from conventional photographic images.

My main concern was the editorializing that is readily part of making size distortions. Making someone toy-like, low and small is a literal put-down, whereas making someone heroic, high and large, is always flattering, notably, in all cultures. So when TIME uses tilt shift effects to make Obama small in an article about how Congress is overwhelming him (think large)–this is editorializing and not  documentary news photography. (The universal visual geometry of values –“big and up is good” vs “small and down is bad” is something I study and call the “Flatland Hypothesis”. See my paper, Rethinking Images and Metaphor: New Geometries as Key to Artistic and Scientific Revolutions,” in The Languages of The Brain, [Cambridge, MA: Harvard University Press, 2002].

Long shared my concern with the danger of editorializing in general, but not in this specific case of TIME’s Obama photo. “The problem would come when [tilt shift] was used for an editorial statement in a non-editorial environment.” Long often refers to the “normal grammar of photography” that will likely feature in his forthcoming textbook on the subject of photo journalism ethics and fakery.

Clyde Mueller, member and Poynter Liaison for the NPPA ethics committee and a past president of the National Press Photographers Association, felt that tilt shift photos should be labeled illustrations. His standard or test for what should be labeled a departure from normal news photography is in the form of a question: Does the photographic technique (such as tilt-shift) mirror the function of human eye? If it doesn’t, then at least label it “illustration” or disclose it in a caption for lack of a better alternative.

In the world of many opinions and fights on the subject of what is ethical practice in news photo alterations, Mueller’s rule of thumb–call it Mueller’s Law– is a good news photography standard that StinkyJournalism can live by. We also happliy recommend it to MsM, such as TIME magazine, as solid ethical practice when publishing tilt-shift photographs.