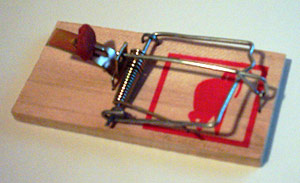 Zachery Kouwe was caught in a DealBreaker trap long before his plagiarism caused him to resign from the New York Times. (Credit: Tristanb, Wikimedia Commons - GNU Free Documentation License)

In the aftermath of Zachary Kouwe’s plagiarism and departure from the New York Times, Clark Hoyt, the Times’ reader’s editor has published a column revealing some more details of what happened. Included is a description of how some of Kouwe’s early cribbing from a blog called DealBreaker was found out; the site set a plagiarism trap.

According to Hoyt, DealBreaker published an internal Citigroup memo but changed a few words to try to trap anyone stealing the site’s scoop without crediting them. If another site got the memo independently, then theirs wouldn’t contain the errors.  But if someone copied from DealBreaker, those minor alterations would point them out. Of course, someone (Kouwe) did reprint the memo, Hoyt writes, and Bess Levin, editor of DealBreaker found him out, posting a “gotcha” just a few hours later.

Because it’s become something of a problem of other news outlets ripping off this here site, lately, when it comes to memos, we’ve been instituting our own theft-prevention measures. Which is why we can say with authority that a certain financial blog of the same initials as our own lifted the memo from us, without attribution.

In the trap post, Levin changed Citigroup CEO Mike Corbat’s memo signature, and the date of the document from 9:39 to 9:35. Linking to Kouwe’s post at the New York Times (now corrected), Levin writes “Funny, SOMEONE’s memo recreates these exact edits, as well. I wonder how that happened.”

Hoyt writes Andrew Ross Sorkin, editor of the New York Times’ DealBook, told Levin that Kouwe “grabbed” the memo from DealBreaker and mistakenly didn’t attribute because he “was going to get his own copy.”  The Times apologized, Levin accepted, and all was well. (Except not really because Kouwe continued to plagiarize, as evidenced by his recent departure from DealBook after the Times found multiple examples of copying in his work.)

The moral of the story seems to be, if you are worried others might appropriate your work without crediting you, you aren’t powerless. No one wants to print intentional errors or typos, but in borderline situations, a well-placed mistake can prove plagiarism.

According to iMediaEthicsresearch, this same trap is often set by map publishers, who, to protect their copyrights and hard work, embed the occasional fake or misspelled names of locations to catch plagiarists.

Unfortunately, Levin’s trap didn’t prevent Kouwe’s continuing his unattributed borrowings. Levin wrote at DealBreaker, after speaking with the Times about her trap last year, “We appreciate that a gentlemanly course of action was taken… we believe it was an honest mistake by one of its new reporters. (We’ve never had this problem before with DealBook…” Yet, others did go on to have this problem.

Hoyt says he’s asked New York Times standards editor Philip Corbett for the other examples of Kouwe’s plagiarism the newspaper found. Corbett “would not provide the examples,” he writes. But hiding them is “to leave a corrupted record within the archives of The Times,” Hoyt argues. “It is not the way to close the case.”