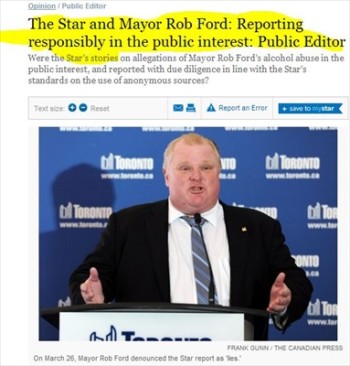 Why did the Toronto Star use anonymous sources to claim that the city’s mayor, Rob Ford, was possibly so drunk that he was kicked out of a military event?

In an April column, public editor Kathy English inspected the story after publication and after receiving complaints from readers.  According to English, the Star‘s reporter Robyn Doolittle has looked into alcohol abuse claims against the mayor “for more than a year.”

“It’s an open secret at city hall that the mayor has battled alcohol abuse,” the Star reported.

At the military gala, unnamed “organizers were concerned [Ford] was impaired” and his speech was “in a rambling, incoherent manner,” prompting calls for Ford to leave, the Star reported. After that event, Ford was accused by a “Toronto businesswoman and former mayoral candidate” Sarah Thomson of groping her, the Star added.

But who were the Star’s sources?  Did the Star ask the mayor for his response before publication?

According to the Star, Ford and his staff were among those who declined to be interviewed on the record about the claims. But, later, Ford publicly commented on the report, calling the story “an outright lie.”

However, when iMediaEthics contacted Ford’s press secretary, George Christopoulos, asking if the mayor would sue over the the claims, if they are, as he claimed, lies, we were told “no further comment.”

Toronto Councillor and “strong Ford ally” Paul Ainslie was named as a source by the Star. Ainslie said that he “urged the mayor’s chief of staff, Mark Towhey, to have the mayor leave the event,” which he said did happen.

Real estate agent Anita Springate-Renaud, who attended the event, told the Star that Ford “wasn’t in any way intoxicated.”  Co-chair Mark McQueen, of the Toronto Port Authority, said Ford was taking pictures with and “interacting with guests,” which seemingly contradicts what anonymous “people in attendence” told the Star of Ford’s behavior at the gala.  Those unnamed sources described him as “incoherent,” “stumbling,” and “rambling,” among other characteristics.

The Star’s  report detailed the various people the reporter attempted to interview on the record, including gala guests, military, “past and present staffers” and organizers.  But, those people either declined to give any information or to be named.

The Star explained why it struggled to get sources to go on-the-record by name.  The newspaper’s sources either didn’t want to talk negatively about the charitable event or face political fallout for talking to the media about Ford:

“The six guests who provided accounts of the mayor’s condition spoke on condition of anonymity. The Star found that while these guests were concerned with the mayor’s condition, they did not want to be identified for two reasons. First, they did not want to be linked to a story that would cast a poor light on the annual Garrison Ball, which raises money for Wounded Warriors, a federally registered charity. Second, these guests, who all have prominent positions in the community, feared they would somehow be blacklisted for speaking out about the mayor.”

English concluded that the reporting met “the Star‘s standards on the use of unnamed sources” and the newspaper handled its reporting “in a responsible manner.”  The newspaper’s lawyer Bert Bruser told English that the Star‘s editor, managing editor and city editor know “who the sources are, why they talked to Star, their motive, their track record.”