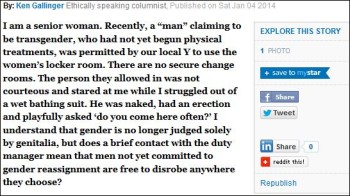 An anonymous woman sent an email to the Toronto Star’s ethics columnist Ken Gallinger that asked about a man identifying as a transgender woman using the women’s changing room.

Many readers questioned if the letter was a hoax and how the newspaper verified the account, which the Star public editor Kathy English responded to in a Jan. 17 column. Gallinger also responded to concerns about his column and stood by his response, which Now Toronto described as “reasonably intelligent and sympathetic.”

In addition to issues related to reporting on the transgender community, the column has received a great deal of attention because of how the Star verifies — or doesn’t verify — letters submitted to Gallinger’s column.

The Toronto Star originally mislabeled the person in question as a man, and not a woman, and has since published a correction. The headline of Gallinger’s column was originally “Transgender man’s behaviour in changeroom unacceptable,” according to The Transadvocate. The correction reads:

“The Jan. 4 Ethically Speaking column included an incorrect headline referring to the behaviour of a transgendered man. As the column correctly stated the question referred to a transgendered woman.”

What did Gallinger’s Column & the Anonymous Letter Say?

“I am a senior woman. Recently, a “man” claiming to be transgender, who had not yet begun physical treatments, was permitted by our local Y to use the women’s locker room. There are no secure change rooms. The person they allowed in was not courteous and stared at me while I struggled out of a wet bathing suit. He was naked, had an erection and playfully asked ‘do you come here often?’ I understand that gender is no longer judged solely by genitalia, but does a brief contact with the duty manager mean that men not yet committed to gender reassignment are free to disrobe anywhere they choose?”

Gallinger’s response highlighted that it was really the behavior of the person — and  not the person — that is in question. “Transgender women, regardless of their status regarding surgical intervention, have the absolute right to use the women’s change room,” he wrote. But, he noted:

“I don’t know, obviously, whether the person you encountered was truly trans, or merely a poseur getting his kicks; the physical evidence makes me suspect the latter. In any event, this person’s behaviour was unacceptable and, arguably, illegal. I urge you to report her (him?) to the management. People like this can’t be skulking around locker rooms, not because of gender issues, but because they have no respect for boundaries — and could be dangerous. Be very clear about the nature of your fears; you were the victim of an inappropriate sexual advance, and your concern is not about genitalia but about behaviour.”

Star public editor: Probably not a hoax, but no way to prove it

Star public editor Kathy English looked into the column and the submitted letter to the editor following the complaints and questions. In her Jan. 17 column for the newspaper, English admitted that she couldn’t conclude the story is real “with absolute certainty.” However, “If this woman’s letter was a hoax perpetuated by organized forces opposed to transgender rights, as many in the transgender community through North America and beyond have declared with all certainty, then it is indeed a grand and elaborate one played on both the Star and the YMCA.”

English wrote that she spoke with the woman “whose name is on the email,” who wants anonymity for privacy reasons and said “I have no agenda, just an incident.” Further, English checked both the woman’s account of events and the YMCA’s account. YMCA said a member sent a complaint letter last year, which lends credence to the woman’s letter.

English noted that one major issue is that Gallinger didn’t fact check the letter. After that revelation, English asked other news ombudsmen how their advice columnists do or don’t verify submissions. (Disclosure: iMediaEthics’ publisher Rhonda Roland Shearer is an associate member of the Organization for News Ombudsmen and therefore received these kinds of e-mails, but didn’t read English’s query to the group.)

According to English’s column: “Gallinger and the Star came under attack after he told trans advocates he deals with issues as they are presented and said he did not verify the letter.” Gallinger said he only fact checks letters if they seem fishy. Likewise, the Guardian‘s sexual healing columnist follows a similar practice, the Guardian‘s readers editor Chris Elliott told English.

Gallinger admits when advice column started he made up reader questions

Gallinger also responded to questions about his column in a Jan. 17 column.  He said of the reaction he received, “what troubled many, however, was the question,” not his response.

“Several justifiably upset trans folk” and a Toronto police officer wanted to know who wrote the letter, he said. Gallinger added that he has “no reason to doubt the claims of the reader,” acknowledged that he “can’t prove it,” and that: “I stand by the answer offered.”

Gallinger also listed “a few principles I follow” including that he only uses real questions, of which he receives about “several hundred each year” by e-mail alone. He did acknowledge that when his column was launched seven years ago, he “had to ‘prime the pump’ with made-up queries.”

Gallinger also won’t identify those who send him questions, although he noted two exceptions: this case, when he provided English (and English only) with the question writer’s e-mail, and another case where a teenager asked about suicide.

“After several exchanges, I became sufficiently concerned to reveal her identity to folks who could help. Was that ethical? Damned if I know,” Gallinger wrote.

Finally, Gallinger said he doesn’t go digging to verify the details of a question. He explained:

“I assume the pet columnist doesn’t verify that a black lab really did eat those slippers, nor the investment columnist ask to see proof of an inquirer’s RSP. I don’t believe many people intentionally lie to me — although a few do, and I won’t run a question I know to be false. But folks write about intensely personal situations — a fight with their sister, a sexual misadventure, a threatening episode in a locker room … often stories they’ve never told another human being. And they describe them as they see them — even if that might not correspond exactly with reality as a good journalist might document it.”

Gallinger declined further comment outside of his Jan. 17 column to iMediaEthics.

iMediaEthics wrote to The Transadvocate asking if it had any response to the Star‘s public editor column and Gallinger’s column.

The site’s Cristan Williams responded to iMediaEthics, pointing us to her Jan. 19 article about the two columns. Williams outlined the main points of each column and did some “minimal retroactive fact checking” and maintains the story was suspect.

Williams went on to list several questions that the Star could have asked to further verify the claims, including how there weren’t any other eyewitnesses, when exactly the incident happened, and more. (See the full list on The Transadvocate’s website.) Further, the article included a call for the Star question submitter to contact Williams to, under the promise the woman’s identity would be confidential, provide answers to Transadvocate’s concerns.