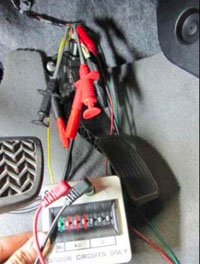 iMediaEthics wrote earlier this week about ABC News’ manipulated video supposedly showing a test of unplanned acceleration in a Toyota vehicle. Commenters pointed out that video from the alleged live-action “road test” included footage from a parked car test without disclosure.

Bottom line: ABC News tried to pass off as real, a video that wasn’t an actual test but an unlabeled news “dramatization.”  Gawker confirmed this manipulation with ABC.

But, apparently, video tricks weren’t the only ethical misstep in this ABC News report.

Matt Hardigree writes at Jalopnik.com that at a March 8 press conference, Toyota officials have argued the whole test was ethically and methodologically faulty.

According to Hardigree, Toyota reports the ABC News report about their cars was based on a study by a professor– David Gilbert of Southern Illinois University-Carbondale–“paid by a trial lawyer group with pending litigation against Toyota.”

Clearly, if true, ABC and Gilbert should have disclosed this conflict of interest. Hardigree writes,

If ABC News asked about this, and there’s no evidence they did, it should have been included in the report.

Toyota also argued the test wasn’t representative of any real-life electrical possibilities. According to Hardigree, Gilbert’s test required he “cut three wires within the electronic throttle control system, then connected two of the wires to each other in a specific pattern and with a specific resistor to create a link between two final wires with a switch in between so he can control it.” (See image above).

Frank Filliponio at AOLAutos writes, “It’s a bit technical, but given the nature of the connector between the wiring harness and the pedal assembly, it’s highly unlikely that such a scenario could ever occur in the real world.’

Revealingly, the same steps work similarly on a host of other cars that are not Toyotas, according to the Toyota presentation to the press. This suggests, of course, that Gilbert’s test performed in the ABC video may not be an accurate measure of a Toyota-specific flaw at all.

Hardigree writes, Toyota “performed the exact same steps on a Chevy Malibu, Mercedes E Class, Honda Accord, Subaru Outback BMW 325i, Ford Fusion, and Chrysler Crossfire and were able to demonstrate the same results as Brian Ross experienced in his report.” If this wiring “flaw” can be simulated in a number of different vehicle brands, Toyota rightly challenges: how is this test legitimate?

In an email response to the Washington Post, Gilbert, who designed the test in the disputed ABC video responds to Toyota’s rebuttal tests saying,

Over the next several days, I will examine their expanded results and conclusions along with my own.  I will visit Exponent next week to get a first-hand look at the information presented today and discuss their methods and procedures. I hope to complete my review of all the information within the next few weeks.

Hummm. This does not sound confidence inspiring.

A video of Toyota’s full presentation, including the tests of non-Toyota cars is available on YouTube.

While all of this looks bad for ABC, and for Gilbert’s test methodology, Toyota still has unexplained acceleration problems to deal with.

Read more at Filliponio at AOLAutos who writes, “Given recent incidents and the unresolved issue in the minds of many, it is still possible that there is an electronic or software issue to blame for the unintended acceleration problems facing certain Toyota models.” He points out that Toyota continues to claim they have “no problem with their electronics” despite the recalls.