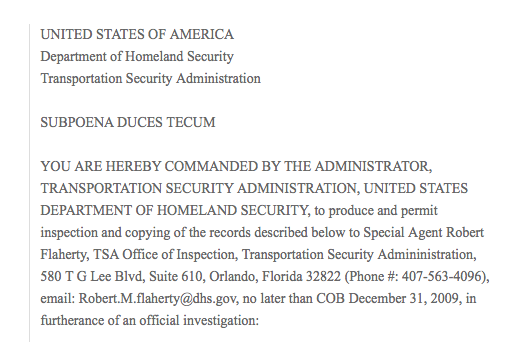 Screen capture of the TSA subpoena Christopher Elliott published on his blog.

Highlighting the limited scope of an amended Free Flow of Information Act–a proposed federal ‘shield law’ to protect journalists from being made to reveal confidential sources–two travel bloggers were visited by representatives of the Transportation Security Administration last week.

Wired reported, the writers (one a professional travel columnist, and the other a photographer) were served civil subpoenas demanding information on an anonymous source who supplied them with a TSA document they each published on their blogs December 27.

The experience of these two writers is a case in point of how the federal shield law, if passed, might leave some journalists out in the cold.

The two bloggers, Steven Frischling and Christopher Elliott, received the document from someone using a gmail account. Kim Zetter writes at Wired that “The document, which the two bloggers published within minutes of each other Dec. 27, was sent by TSA to airlines and airports around the world and described temporary new requirements for screening passengers through Dec. 30, including conducting “pat-downs” of legs and torsos.”

Frischling, who blogs at Flying With Fish and is a self-employed photographer, decided to turn over his computer after consulting with his lawyer because he realized “there was no federal shield law to protect him,” according to Zetter’s Wired story. Elliott, who writes for National Geographic and is a news columnist in addition to blogging, refused the subpoena, and indicated his intention to fight it in court, according to FOX News.

The subpoena was eventually withdrawn, suggesting that the TSA did not have a strong case for investigating these two writers. The document had also been widely distributed. According to Zetter, it wasn’t classified, and recipients may not have been explicitly told not to share it.

It seems like this is a case where the work and personal lives of two journalists were disrupted unnecessarily. Frischling even lost a computer, which the FOX News story by Judith Miller reports the TSA returned to him broken. (Miller was herself jailed for refusing to reveal information about her involvement in the disclosure of the identity of covert CIA agent, Valerie Plame) Of course, it could have been worse. Either or both of the bloggers could have been jailed (for up to a year, according to Wired, and Elliott’s subpoena) for refusing the TSA’s demands.

One hope for a federal shield law (the Senate version of the bill is up for a vote) is that it would protect journalists from this very type of situation. In Miller’s FOX News report, she writes “Lucy Dalglish, the head of the Reporters Committee for Freedom of the Press, called the subpoenas ‘ridiculous’ and said that the DHS’s actions demonstrated the need for a federal shield law to prevent journalists from being jailed for protecting their sources.”

The same ethics, meanwhile that compel a journlist to protect their source, should compel a blogging journalist. TechCrunch blogger Michael Arrington writes, “As bloggers, we have a duty of confidentiality to our sources. And that means keeping information confidential even if threatened with the tyranny of government. And even if the legislatures and courts haven’t decided that as bloggers we have real rights protecting us from that tyranny.”

As Arrinton hints, according to the amended version of the shield bill, the fact is that Elliott and Frischling might not have been safe, even if this shield legislation were already in place. Last September, the Senate Judiciary Committee unanimously adopted an amendment limiting the term “journalist” to those writing for traditional media like news and wire services. Bloggers, even those who blog journalistically, or who hold other jobs in print media, would be unprotected.