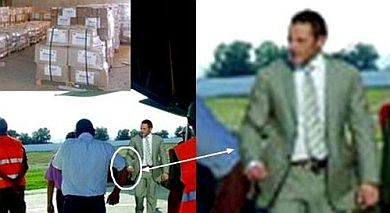 The blog Nawaat spotted that this photo appears Photoshopped. The man in blue is closer to the camera, and yet his elbow is cut off by Sakhr El Matri. (Credit: Nawaat)

Tunisian bloggers are calling out the French newspaper Le Temps, and the Arabic version of the newspaper, Assabah, for publishing a doctored photo Aug 20.

The photo shows Sakhr El Matri inspecting humanitarian aid supplies before they are put in a plane and sent to Pakistan’s flood victims. El Matri is the son-in-law of Tunisian president Zine el Abidine Ben Ali.

But, the independent Tunisian blog Nawaat noticed that the photo appears to be Photoshopped.  If you zoom into the photo, you can see the arm of the man in blue, who appears to be closer to the camera than El Matri, is cut off by El Matri.  (See a Google Translate of Nawaat’s analysis of the photo here.)  The man in blue’s arm being cut off suggested a cut-and-paste of El Matri into the photo, Nawaat wrote.  Also, the photo had some weird shadowing issues and light exposure.

According to Global Voices, this is just the most recent case of fake information that Tunisia’s bloggers and “citizen media” have spotted in mainstream media.  Reporters without Borders noted in its March report that Tunisia has high Internet censorship and filtering, but that Tunisia’s blogging community is very active.

“The fact that the doctored images were outed online clearly reached the editors of the newspapers because the photos were promptly replaced soon after in the online version,” Global Voices wrote.

Just two days later, on Aug 22, Nawaat reported that the photo was no longer available on either Le Temps or Assabah’s websites.  And, neither of the sites posted corrections or updates explaining the photo’s removal.

But, PDFs of both newspapers still are available.  See the photo on page 3 of either Le Temps or Assabah here and here.

Global Voices also highlighted that El Matri “is fully involved in the management of both newspapers.”  El Matri is named on Le Temps’ website as prime minister, and Arab news site Menassat reported in May of 2009 when El-Matri bought a controlling share in the media company Dar al-Sabbah, which owns both newspapers.

iMediaEthics has written to Le Temps and Assabah and will update with any response.