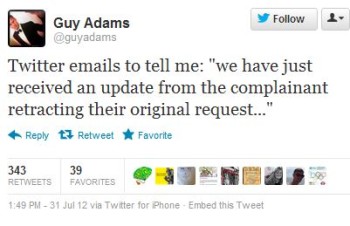 Reuters reported that NBC Sports “confirmed that it had filed a complaint with Twitter” for tweeting Zenkel’s “personal information.”  Adams had posted Zenkel’s @nbcuni.com email address along with other tweets critical of NBC’s Olympic coverage.

Deadspin, which argued that “NBC executives’ corporate email addresses are neither personal nor private,” noted that Adams’ tweets “are now hidden, but have been preserved on Topsy” here.

The Wall Street Journal reported yesterday that Twitter has since “reinstated” Adams’ account.  Adams wrote July 31 about the incident, explaining that “even now that my account has been re-activated, all I got was a four-sentence email from Twitter’s ‘Trust and Safety’ department telling me the initial complaint had been retracted.” Prior to that, he said Twitter “simply wouldn’t return emails or calls” and that he “still” doesn’t understand how his tweet wasn’t OK.

Noting that Twitter’s “privacy policy” doesn’t ban posting anything “previously posted or displayed elsewhere on the internet,” and that he found Zenkel’s email on a 2011 blog, Adams questioned why he was kicked off the social networking site.

Adams added that NBC’s Christopher McCloskey had revealed that Twitter told NBC about Adams’ tweet of Zenkel’s email, raising “suggestions of a conspiracy” because Twitter “has, after all, been running a cross-promotion with NBC throughout the Summer Olympics.”

Twitter apologized for “the part of this story that we did mess up” in a statement about the site’s “approach to Trust & Safety and private information.”  The company wrote that it doesn’t “proactively report or remove private information on behalf of other users, no matter who they are” but that in this case, “the team working closely with NBC around our Olympics partnership did proactively” flag Adams’ tweet “and encouraged them to file a support ticket with our Trust and Safety team to report the violation.”  But, Twitter defended the suspension, writing that its Trust and Safety team “acted” independently.