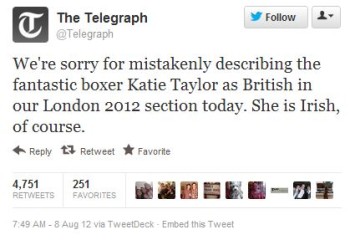 The UK Telegraph apologized after erring in the nationality of an Olympics athlete, the Irish Independent reported.

The Telegraph had mis-identified Irish boxer Katie Taylor as British, according to the Guardian’s Roy Greenslade.

According to the Independent, the apology was posted on the Telegraph‘s Twitter and read:

“We’re sorry for mistakenly describing the fantastic boxer Katie Taylor as British in our London 2012 section today. She is Irish, of course.”