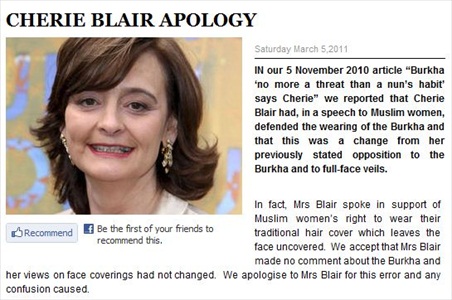 The UK Express apologized to Cherie Blair for its Nov. 2010 story. (Credit: Express)

The UK Express issued an apology to Cherie Blair on March 5, four months after the appearance of the Nov. 5, 2010 article “Burka ‘no more a threat than a nun’s habit’ says Cherie.”  Blair is the wife of former prime minister Tony Blair.

The Express had reported in 2010 that Blair defended “burkha-clad women” and “compared the all-enveloping robes to a nun’s habit.”  According to the Express, her remarks indicated a change in position from her 2009 criticism of “women in Afghanistan being forced to wear burkhas as a symbol of ­Taliban ­tyranny.”

“In fact, Mrs Blair spoke in support of Muslim women’s right to wear their traditional hair cover which leaves the face uncovered.  We accept that Mrs Blair made no comment about the Burkha and her views on face coverings had not changed.  We apologise to Mrs Blair for this error and any confusion caused.”

The original story appears to have been removed from the Express’ website, but it was reposted on Free Republic’s site here.