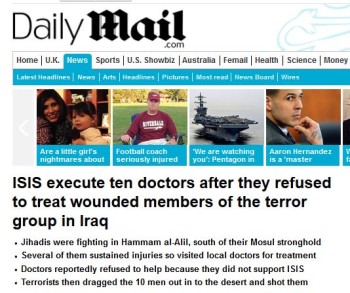 The UK Daily Mail used a photo dating back to at least 2014, showing three masked, apparent militants pointing guns at three people, and claimed it was a photo of a recent ISIS execution.

Days after iMediaEthics contacted the Mail asking about this matter, the Mail unpublished the photo without disclosure to readers. iMediaEthics still hasn’t heard back from the Mail in response to our inquiries.

The Mail published the photo with the caption “Shocking: This photograph – taken in the battle-ravaged area 15 miles south of the extremists’ northern Iraqi stronghold Mosul – captures the moment fighters killed several of the doctors with a bullet to the head.”

The Mail’s April 10 story was titled, “Killed with a bullet to the head: ISIS execute ten doctors after they refused to treat wounded members of the terror group in Iraq.”

“A photograph taken in the battle-ravaged area 15 miles south of the extremists’ northern Iraqi stronghold Mosul captures the moment fighters killed several of the doctors with a bullet to the head,” the Mail reported.

See below iMediaEthics’ screenshot of the article.

But the graphic photo of the men with guns to their heads was published back in September 2014 on the website World Affairs Journal,

iMediaEthics contacted the Mail April 11 asking about the photo and if the Mail would publish a correction. We received no response. When we viewed the article on April 17, the photo was suddenly missing without any correction, note or explanation to readers.

See below a screenshot of the article on April 17, with the graphic image now deleted and the Mail’s error covered up.

iMediaEthics has again written to the Mail for a correction.