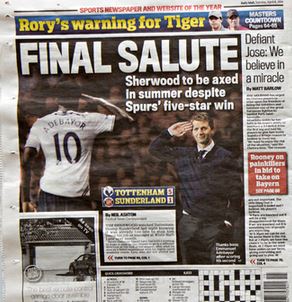 Above, see the Mail's print edition. Via the Guardian

The UK Daily Mail and Daily Mirror both manipulated a news photo of a soccer player saluting his manager and a team coach, The Guardian‘s Roy Greenslade reported.

The Mail doctored the image to remove Tim Sherwood, the manager for Emmanuel Adebayor, who is the striker for UK football (soccer) team Tottenham Hotspur.

The Mail confirmed it doctored the image, which it called “a mistake,” according to the UK Press Gazette. The Mail is investigating the incident, the Press Gazette added.

The Mirror seemingly also doctored Sherwood out of the image but blocked out where he would be with a big headline.

The Guardian‘s Greenslade published the two doctored images as they appeared in print, along with the Guardian‘s use of the unaltered photo in comparison.

The Mail (left), the Guardian (middle) and the Mirror (right) all used the same Getty Images photo in their print editions. The Mail and The Mirror both appear to have doctored the image.

Online, the Mail used the original version of the photo.

According to the Mail Online’s slug line, the image is credited to Getty Images.

Getty Images’ original photo is published on Getty’s website. It was taken by Ian Welton for Getty Images. The caption reads:

The Press Gazette, however, reported that the image was taken by the Associated Press’s Kirsty Wigglesworth. The AP Images’ website has published two photos by Wiggleworth of the same moment of Adebayor saluting.

iMediaEthics has written to the Mail and the Mirror for confirmation they doctored the photo and for comment.

iMediaEthics has also reached out to Getty Images for comment. We’ll update with any additional information.