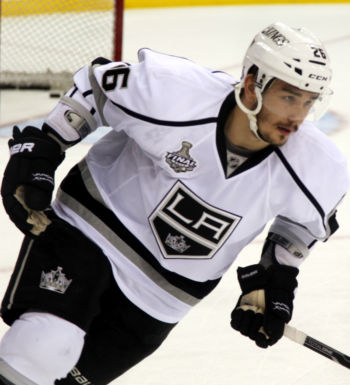 The Feb. 17 comments were in response to broadcaster Kenny Albert’s description of Voynov’s background, the Washington Post reported. Albert had said, “He was arrested on domestic violence charges, subsequently suspended by the National Hockey League, now playing in the KHL [Russia’s Kontinental Hockey League].”

Voynov took a plea bargain, “pleaded no contest to a misdemeanor charge of corporal injury to a spouse,” spent two months in jail, and was suspended from the NHL, according to the Los Angeles Times. His team, the Los Angeles Kings, ended its contract with Voynov, and Voynov went back to Russiia.

Then Milbury, who is a studio analyst for the NHL on NBC, said, “He left a huge void in the Los Angeles Kings’ defense, otherwise [they] may have gone on to win more than the championships they did already. This guy was a special player, and an unfortunate incident left the Los Angeles Kings without a great defenseman.”

Milbury stood by his remark, telling the Post he was giving “the on-ice impact of his being thrown out of the league,” which he said was “the right call, 100 percent.” iMediaEthics has written to NBC Sports to ask if NBC aired any comment or statement about Milbury’s remark.

Katie Couric apologized Feb. 12 for saying during the Olympics opening ceremony that the Dutch skate as “an important mode of transportation” for when canals freeze. NBC skiing analyst Bode Miller apologized after saying Austrian skiier Anna Veith might have problems performing because she just got married. NBC also apologized after analyst Joshua Cooper Ramo said that “every Korean will tell you that Japan as a cultural and technological and economic example has been so important to their own transformation.”