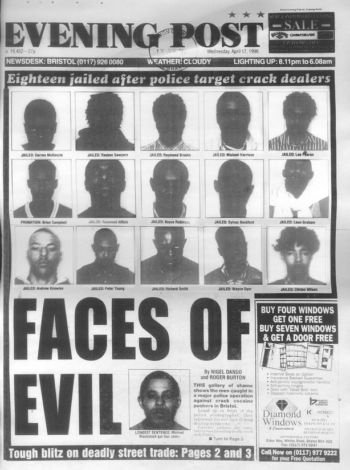 The Bristol Post, a daily newspaper in southwest England, apologized March 7 on its front page for a front-page story the newspaper published in 1996. That April 17, 1996 front page was headlined “Faces of Evil” and showed “16 police pictures of black men jailed for dealing in crack cocaine.”

The newspaper’s editor, Mike Norton, admitted this week in a lengthy article and apology that the front page story was “a huge mistake” that “essentially destroyed what little credibility and trust the Post had within Bristol’s African and Afro-Caribbean community.” While the photos were of drug dealers, Norton said the “problem was one of context” because the newspaper was “already disconnected from the city’s black communities.”

“The Faces of Evil front page, with its black faces ranged in rows like slaves held in cages, cemented that view,” he wrote.

Norton noted that he wasn’t editor then (the paper was then known as the Evening Post) and didn’t “blame the journalists who conceived it.” That said, he acknowledged at the time he “would have published the page, too.”

Norton said he is apologizing now because he wants to change the newspaper’s relationship with the community, encourage discussion, and move forward. “I’m taking positive action and talking to people in the Black, Asian and Minority Ethnic (BAME) community – sometimes privately, sometimes publicly – in order to try to address their perceptions and to try to reset the relationship,” Norton wrote.

In addition, he is trying to hire more black staff writers, and the newspaper will co-host city meetings on the town’s role as a port in the transatlantic slave trade.

iMediaEthics wrote to Norton to ask what sort of response the paper has seen so far to his apology, and for more details on the paper’s attempts to get more black writers. Norton responded, “I don’t have any further comment beyond the piece, thank you. My article is very fulsome and I’d rather let that stand.”