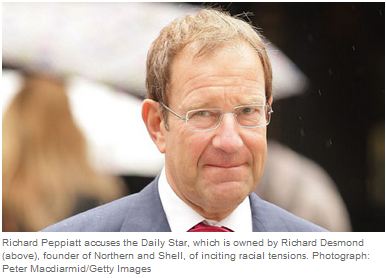 Reporter Richard Peppiatt resigned from the UK Daily Star last week “in protest” of what he called the newspaper’s “anti-Muslim” slant, the Guardian reported.

Peppiatt, who reported for the Star for two years, explained in a resignation letter to Richard Desmond, the Daily Star’s owner. He also criticized the Star for having “skewed news values” and for leaving the UK media regulation group the Press Complaints Commission.

The Guardian published his letter here.

He claimed that the story was “made up,” commenting that the “incendiary” story “was twisted and bent to fit an agenda seemingly decided before the EDL’s leader Tommy Robinson had even been interviewed.”

Peppiatt admitted to writing fake stories for the Star and dressing up as other people for stories.  Among the fake stories, Peppiatt listed making up stories about

He reportedly pretended to be: “John Lennon, a vampire, a Mexican, Noel Gallagher, Saint George (twice), Santa Claus, Aleksandr the Meerkat, the Stig, and a transvestite Alex Reid.” He also claimed to have proposed to Susan Boyle and dressed in a burkha.

Peppiatt addressed the Star’s controversial story about “taxpayer-funded Muslim-only loos.” The July 15, 2010 story was ruled “inaccurate and misleading” by the PCC in September 2010.  The Star had to publish the full adjudication and retracted the story.

As Peppiatt recalls the story’s development:

“Undeterred by the nuisance of truth, we omitted a few facts, plucked a couple of quotes, and suddenly anyone would think a Rochdale shopping centre had hired Osama Bin Laden to stand by the taps, handing out paper towels.” He said he wrote the “follow-up” story reporting “our postmodern victory in “blocking” the non-existent Islamic cisterns of evil.”

He claimed that he accepted the stories because he was “too scared for my career, and my bank account, to refuse.”  Further, Peppiatt claimed that “”If you won’t write it, we’ll get someone who will,” was the sneer du jour.”

“I may have been just a lowly hack in your business empire, void of the power to make you change your ways, but there is still one thing that I can do; that I was trained to do; that I love to do: write about it.”

In a statement, the Daily Star denied Peppiatt’s accusations.

“Regarding the paper’s coverage of Islam, he never voiced any disquiet over the tone. For the record, the Daily Star editorial policy does not hold any negativity towards Islam and the paper has never, and does not endorse, the EDL.”[Peppiatt] refers to a Kelly Brook story – in fact he approached and offered the newspaper that story, vouched for its accuracy, and then asked for and received an extra freelance fee for doing so,” the statement said.

According to The Guardian, the newspaper “claimed that Peppiatt had been warned by senior reporters after suggesting he would make up quotes” and that Peppiatt was “passed over” for “several staff positions” which may explain his “grudge.”

The Media Blog weighed in on Peppiatt’s letter, saying “we salute you.” And Hope Not Hate, an organization “to counter racism and fascism in elections and the community,” called the Star’s reaction “predictable.”

The New Statesman commented that that “journalists don’t have any protection should they decide they’d rather not do a story they’re told to by their managers” and noted that the National Union of Journalists’ (NUJ) suggestion of a “conscience clause.”

In a Jan. 15, 2009 article, the NUJ called for the PCC to add the clause, which would “allow [journalists] to decline to undertake work they consider in breach of the union’s Code of Conduct.”

iMediaEthics is writing to the NUJ to see where it stands in its “conscience clause” stance.