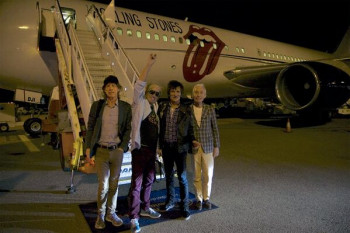 “It’s still a bit early to give a meaningful total, but we have received a number of complaints about yesterday’s coverage in the Daily Mail, Daily Mirror and Daily Star (which, as a Northern & Shell title, is currently outside our remit),” the PCC’s Michael McManus told iMediaEthics by e-mail.

However, none of the complaints so far are from Jagger, whose band The Rolling Stones postponed a concert on its tour of Australia and New Zealand in response, according to the BBC. The PCC told us it couldn’t confirm if Jagger had complained due to confidentiality within its complaints process.

Scott was found dead March 17 in her New York apartment.

The Guardian reported that numerous UK news outlets published photos of Jagger, including the Daily Mail, the Daily Mirror and the Daily Star.

The Daily Mail’s headline for a March 17 story was “The moment Mick heard L’Wren was dead: Jagger’s face is etched with grief after hearing ’embarrassed and millions in debt’ fashion designer lover had killed herself.” The article included a handful of photos of Jagger.

The article described the pictures of Jagger as “etched with grief,” “utterly shocked,”  “pale and shaken” and even labeled the photos as “tragic.”

The Daily Mirror used the photo in a promotion for the tablet version of its newspaper. See below.

The Daily Star also used one of the images of Jagger on its front page, according to its website. See the front page below.

The Guardian‘s Joan Smith argued that the UK media’s handling of the photos of Jagger prove that the press is ignoring both the UK Leveson Report into press practices and the Press Complaints Commission’s code.

For example, the PCC advises sensitivity in reporting. In a section of the code on “Intrusion into grief or shock,” the code states:

“i) In cases involving personal grief or shock, enquiries and approaches must be made with sympathy and discretion and publication handled sensitively. This should not restrict the right to report legal proceedings, such as inquests.

*ii) When reporting suicide, care should be taken to avoid excessive detail about the method used.”

iMediaEthics has written to the PCC for more information and will update with any response.