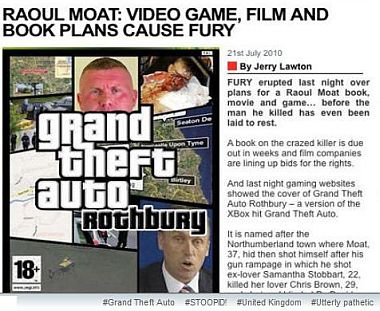 This Daily Star article (since removed from The Star website, but available via screenshot on Destructoid) was based on a hoax. The Daily Star issued an apology, admitting it did not attempt to verify or seek comment from Rockstar Games. (Credit: Destructoid)

British newspaper The Daily Star published an apology July 24 for a July 21 hoax it printed about Rockstar Games, the company that makes the Grand Theft Auto video games.

Video gaming website Joystiq wrote July 24 that Rockstar Games’ forthcoming game, that turned out to be a hoax, was based on Raoul Moat’s July “shooting rampage.”

In real life, Moat shot his ex-girlfriend and her new boyfriend in early July, The Telegraph reported.  Seven days later,  Moat shot a police officer during a police stand-off and then killed himself.

The Daily Star wrote that along with an article saying Rockstar Games intended to release “Grand Theft Auto Rothbury,” a version of Grand Theft Auto, the newspaper published a supposed cover image of the game and comments from a family member of one of the victims.

Destructoid wrote that The Daily Star even interviewed the 69-year-old grandmother of one of Moat’s victims, Ann Hornsby, about the supposed game.

The newspaper flat out states in the apology that it didn’t verify the story, seek comment from Rockstar Games before running the story, or approach the hoax story with any skepticism.

“It is now accepted that there were never any plans by Rockstar Games to publish such a game and that the story was false. We apologise for publishing the story using a mock-up of the game cover, our own comments on the matter and soliciting critical comments from a grieving family member,” The Daily Star wrote.

“We unreservedly apologise to Rockstar Games and we have undertaken not to repeat the claims again. We have also agreed to pay them a substantial amount in damages which they are donating to charity. ”

Destructoid’s Jim Sterling wrote July 24 that the original story “sparked a huge backlash from gamers” and was removed from the Daily Star website that day.

Destructoid is a gaming community website with editors in the U.S. and U.K.

“The report was based on a shockingly tasteless and obviously Photoshopped box art for the non-existent title — though the Star ran the report as cold, hard fact, even going so far as to get quotes from the still-grieving family members of the shooting victims,” Joystiq wrote.

A screenshot of The Daily Star article is available on Destructoid.

The Guardian’s Roy Greenslade wrote July 24 that this article is just “the latest example” of problematic journalism from The Daily Star under ownership by Richard Desmond, citing a half dozen examples in 2010 of Daily Star errors.

Errors included the use of an old photograph to accompany an April headline, a February apology to Heather Mills for a misleading headline and May libel damages to Little Britain TV star Matt Lucas.