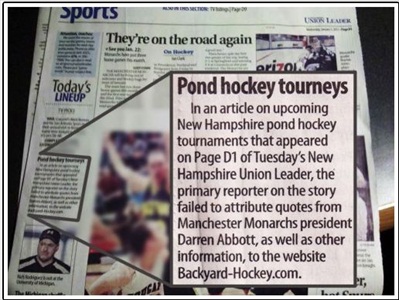 The Union-Leader admitted that their reporter failed to give proper attribution to a hockey blogger's publication. (Credit: Union-Leader, Backyard-Hockey.com, Screenshot detail from the Union-Leader)

The New Hampshire Union-Leader published an admission of a lack of proper attribution after hockey blogger Joe Proulx at Backyard-Hockey.com claimed his work was plagiarized by the newspaper.  However, Union-Leader editors failed to apologize or use the “p” word — plagiarism — unlike other news outlets (see examples here and here).  The freelancer who committed the failed attribution is no longer working with the Union-Leader.

Proulx first called out the plagiarism in a Jan. 4 blogpost.  He explained that he spotted a story in the Union-Leader that lifted eight paragraphs from his blog. Proulx claimed that the Union-Leader plagiarized his Dec. 29 blog post reporting an interview with Manchester Monarchs’ hockey team president Darren Abbott (see here).

Describing his discovery of the plagiarism, Proulx blogged:

“The article then changed the subject to the one-day Manchester Monarchs Pond Hockey Classic tournament that will take place in Manchester, NH, one week later. This is where Backyard-Hockey.com starts feeling awfully flattered. Because of the remaining thirteen paragraphs in the article, eight of them were stolen from this very website.”

As evidence, he published several side-by-side comparisons of text (see here), noting that the Union-Leader changed “off-ice” to “office.”

“Despite the blatant theft of my hard work, Backyard-Hockey.com is not given any credit in the Union Leader article. All credit is given to the story’s author, Roger A, and two contributing staff reporters, John H and Marc T. I have no idea which one of these three writers is responsible for the use of my work, and it’s entirely possible that two of the writers have no idea that the text was copied (for this reason I’ve chosen to exclude their full names.) But at least one of them does. And it makes me angry.”

Proulx explained in a follow-up post Jan. 5 that he e-mailed the Union-Leader‘s news vice president asking for an apology and attribution — placed “above the fold on the front page of the sports section.”

“It’s not much to ask, and it’s the right thing to do. I put in the time and effort to gather and produce the information your writers stole, so it’s the least you can do,” Proulx stated his e-mail read.

According to Proulx’s blog, the news vice president, Tami Plyler, responded (emphasis ours): “We recognize that attribution should have been made. There will be a clarification to that effect on tomorrow’s sports page.” To characterize the lack of proper attribution as anything other than plagiarism that necessitates a correction and apology is inadequate in StinkyJournalism’s view.

Proulx blogged that his “initial reaction” to Plyler’s e-mail “was a combination of anger and annoyance.”  But, he concluded that at least he was getting the attribution he sought.

The newspaper did print a “clarification,” to which Proulx blogged “I am genuinely pleased that they followed through on their promise.”

The clarification read:  “In an article on upcoming New Hampshire pond hockey tournaments that appeared on Page D1 of Tuesday’s New Hampshire Union Leader, the primary reporter on the story failed to attribute quotes from Manchester Monarchs president Darren Abbott, as well as other information, to the website Backyard-Hockey.com.”

Proulx told StinkyJournalism via e-mail that he hasn’t had any further contact with the Union-Leader since the clarification was published.  Asked if he’s received any apology from anyone at the Union-Leader, Proulx wrote: “No, I was curious to see if the offending writer would reach out, but as of right now, they have not.”

Proulx told StinkyJournalism that an anonymous commenter wrote on Proulx’s blog that the freelancer had been let go from the Union-Leader as a result.

StinkyJournalism wrote to the freelancer — Roger Amsden — who confirmed that he was responsible for the plagiarism and that he had lost his job over the incident.  Amsden explained that he “thought he was reading a press release which the blogger had written an introduction to.”

“My emotions have gone from anger and betrayal to vengeance and determination to gratitude and an overwhelming feeling that the hockey community is very much alive, close-knit, and willing to back up one of their own. And now, a day later, I’m trending towards apathy. They did it, I proved it, they ‘clarified.’ They didn’t apologize, per se, but they clarified.”

“I’ve chosen not to pursue it any further, primarily because I’ve seen others in similar situations not receive any response whatsoever, or if they do receive a response, it’s the publication backing their writer and challenging the assertions of the blogger (I’m most familiar with the Toronto Sun/Pension Plan Puppets ordeal from August 2010, as it involved another hockey blog). That the Union Leader VP responded, then followed up on her promise, is probably the most I could have hoped for.

“That said, I’m still puzzled how plagiarism such as this is taken much more seriously in a high school classroom than it is in the ranks of professional journalists.”

StinkyJournalism has written to the Union-Leader and will update with any response.

The Union-Leader’s plagiarism is the latest in the past few months involving a blogger and a more prominent news outlet.  In early November, blogger Monica Gaudio claimed her work was plagiarized by magazine Cook’s Source (which is now defunct as a result of the plagiarism incident).  Later that month, two bloggers claimed Jay Leno’s Tonight Show lifted their Taylor Swift montage video concept without attribution.  In late December, Orange County Register reporter Kevin Ding claimed ESPN anchor Will Selva lifted part of his column.

StinkyJournalism previously wrote about the Union-Leader when it announced it would not publish gay wedding announcements.