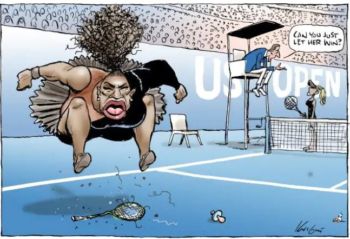 In a February ruling, the council examined the complaints against the Herald Sun’s cartoon, which depicted Williams jumping up and down and a referee asking her opponent if she would let Williams win.

The Herald Sun stood by its cartoon in response to complaints of racism and sexism arguing it was in the cartoonist’s style and depicting Williams’ reaction with humor. “Specifically, concern was expressed that the cartoon depicted Ms Williams with large lips, a broad flat nose, a wild afro-styled ponytail hairstyle different to that worn by Ms Williams during the match and positioned in an ape-like pose,” the press council explained. “Ms Williams’ features contrasted with those of Ms Osaka who, while of Japanese-Haitian descent, is depicted as white with blonde hair, lacking any particularly distinguishing or exaggerated features.”

iMediaEthics has written to the Herald Sun for its response to the ruling.

“The Council considers that the cartoon uses exaggeration and absurdity to make its point but accepts the publisher’s claim that it does not depict Ms Williams as an ape, rather showing her as ‘spitting the dummy’, a non-racist caricature familiar to most Australian readers,” the council ruled. “Nonetheless, the Council acknowledges that some readers found the cartoon offensive. However, the Council also accepts that there was a sufficient public interest in commenting on behaviour and sportsmanship during a significant dispute between a tennis player with a globally high profile and an umpire at the US Open final. “