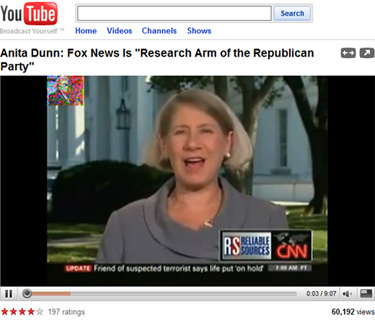 Earlier today, we wrote about the White House’s new campaign to combat false or misleading assertions made by the media. At the time, it seemed as though that battle would take place primarily on the White House blog, where posts would compare alleged lies to the facts.

Now it seems that the fight has moved to the airwaves. This past Sunday, White House communications director Anita Dunn appeared on CNN’s “Reliable Sources” and proceeded to pummel Fox News with a host of accusations, including the claim that the channel is the “communication arm of the Republican Party.”

But if the press had previously failed to fact-check Fox (and the various other outlets that prompted the White House’s press accountability endeavor), they weren’t going to let Dunn get away with any misinformation of her own.

Baltimore Sun TV critic David Zurawik wrote about Dunn’s appearance on his Sun blog, Z on TV (which we learned about via The Huffington Post). Regarding Dunn’s statement that Fox News’ election coverage focused heavily on ACORN and then-candidate Obama’s relationship to former Weather Underground member Bill Ayers, Zurawik writes, “…Dunn is absolutely wrong about Fox’s coverage of the election last fall. I did watch it every day and wrote about it several times a week for this blog. And while I didn’t like a lot of what I saw with soft interviews and only favorable coverage of Sarah Palin, it wasn’t all about Bill Ayers and ACORN by a long shot. In fact, I saw Shepherd [sic] Smith take down Joe the Plumber after that GOP-created character came on Fox and said, ‘A vote for Obama is a vote for the death of Israel.’ I wonder if Smith was acting as an ‘arm’ of the Republican Party on that one.”

Although he may not be a fan of Glenn Beck’s home channel, Zurawik is weary of the president’s attempts to “punish” Fox News. He sees the campaign against Fox News as a troubling symptom of the administration’s lack of respect for a free press.

In the Wall Street Journal, John Fund questioned the benefit of targeting one channel in particular. “We’ll soon see if the Obama White House’s decision to treat Fox News as a direct adversary works out for it — or just makes the White House seem like another antic performer in Washington’s political mud-wrestling contests.”

Howard Kurtz, the host of “Reliable Sources,” took questions from readers of the Washington Post on an online forum this past Monday. A reader in Baltimore, Maryland wrote, “Howard — Your interview yesterday with Anita Dunn was nothing short of stunning. Her visceral bitterness toward FOX was amazing. The overall media was very much tougher on Clinton and Bush, yet those administrations didn’t openly declare war on a network. FOX seems to be the only major news outlet that hasn’t fallen in line in the Obama adulation chorus, and overall coverage continues to be worshipful. Dunn seems to be demanding 100 percent compliance from everyone. Don’t her bitter remarks identify this as the most thin-skinned and vengeful administration ever?”

Kurtz responded diplomatically, writing, “…This is not about Anita Dunn being ‘bitter.’ This represents a calculated decision by the White House to go after a network that it believes isn’t giving Obama anything resembling a fair shake. The question I would raise is whether the president would benefit by engaging with Fox’s audience. And of course Fox can now use this to market itself as the channel that stands up to the administration (a technique that was not available during the Bush administration).”

To hear other responses to Anita Dunn’s appearance, see Danny Shea’s story on the Huffington Post.