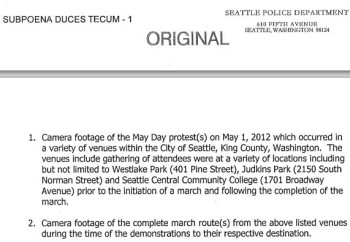 See above a screenshot from the subpoena. (Credit: KIRO, screenshot)

As we wrote May 8,  the Seattle police subpoenaed Seattle TV news KIRO-7 and five other news outlets (KOMO-4, KING-5 TV, KCPQ-13 TV, the Seattle Times and the Seattle Post-Intelligencer) for footage from May 1 protests.

According to a May 2 Associated Press report, “eight people were arrested” during the protests and the police anticipated “additional arrests…as detectives review news footage and surveillance video.”

The subpoena calls for “camera footage” from the protests and “the complete march route(s)” to be used “as evidence material to the investigation or prosecution of a felony” like “malicious mischief.”

The Seattle Stranger summarized how news outlets in Seattle are responding to the subpoena, noting that KOMO-4 and KING-5 both gave the police “copies of video that it already aired” but not unaired footage.  KCPQ-13 and the Seattle Times hadn’t given any footage to the police as of the Stranger’s May 11 report.  The Stranger noted that KOMO’s news director Holly Gauntt said that it doesn’t have to turn over “raw video” because of the shield law.  She also told the Stranger that it’s “a bit of an irony” that the police won’t give KOMO “dash cam video” but is asking for KOMO’s footage.

The Seattle Post-Intelligencer reported that “Assistant Chief Jim Pugel said those [media outlets] that have responded have been doing so quickly.”  Pugel also said “we’ve had complete cooperation” and the department received “a lot of information” as of May 8, according to the Stranger.

The Seattle Times reported that the U.S. Attorney asked for it to “not purge for 120 days any photos or videos taken by staff members” of the protests.

We have written to KIRO-7, KOMO-4, KING-5, KCPQ-13, the Seattle Times and the Seattle Post-Intelligencer asking for updates on how they responded to the subpoena and will update with any responses.