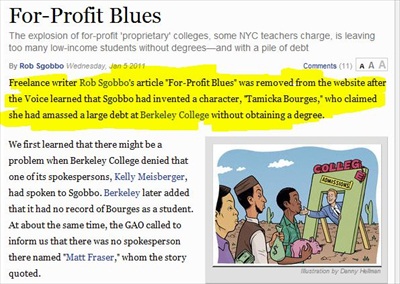 The Village Voice retracted a story by freelancer Rob Sgobbo after it was revealed he made up at least two sources.

After the Voice‘s retraction, Sgobbo was fired from New York Daily News where he reported on education, and all of his posts were removed from the Huffington Post, where he had blogged.

Sgobbo is a recent graduate of Columbia’s Graduate School of Journalism.

Ortega apologized to Berkeley College and the Government Accountability Office for publishing “this false material.”

As Ortega explained, “We first learned that there might be a problem when Berkeley College denied that one of its spokespersons, Kelly Meisberger, had spoken to Sgobbo. Berkeley later added that it had no record of Bourges as a student. At about the same time, the GAO called to inform us that there was no spokesperson there named “Matt Fraser,” whom the story quoted.”

The Daily News’s Jennifer Mauer told Gawker in a statement that it will not use Sgobbo’s work anymore and that the newspaper is looking through his old stories.

“The Daily News has terminated its relationship with freelancer Rob Sgobbo. He has assured us he never fabricated anything that appeared in the Daily News; however, we are reviewing his stories for any inconsistencies.”

“Our policy is that when a blogger is found to have fabricated a story — either on our site or for another outlet — his or her posts automatically come down.  We deleted Rob’s posts today in accordance with that policy.”

Mediaite noted that the Village Voice has had two other instances in the past decade where reporters made up sources.

In 2003, Vivian Gornick reportedly admitted she had “used ‘composite’ characters and conversations in some of her pieces for the paper.”  In 2006, the Voice retracted Nick Sylvester’s cover story because “people quoted in the story came forward saying they had never spoken to Sylvester.”

Sylvester was suspended for his fabrication.