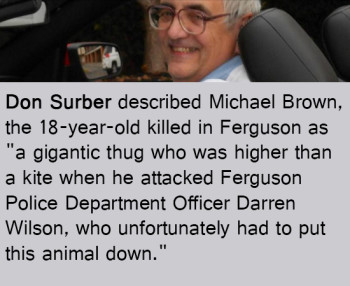 (Image of Surber via Romenesko)

The Charleston, West Virginia Daily Mail fired an editorial writer for his “unfortunate, inflammatory” and “inexcusable” decision to call Michael Brown, the 18-year-old killed by a police officer in Ferguson, Missouri earlier this year, an “animal,” Jim Romenesko reported.

“We got a lot of complaints via telephone call, tweets and email — so many that, honestly, I’m not sure it was possible to count,” editor Brad McElhinny told iMediaEthics by e-mail.

The editorial writer, Don Surber, wrote on his personal blog that Brown was “a gigantic thug who was higher than a kite when he attacked Ferguson Police Department Officer Darren Wilson, who unfortunately had to put this animal down.”

When asked for comment about his firing, Surber told iMediaEthics by e-mail: “No comment. I want this to end.”

In an Oct. 30 post announcing the firing, McElhinny acknowledged that the blogpost was published on Surber’s personal blog but still affected the newspaper.

“It’s his own blog, but still, he’s known as a Daily Mail editorial columnist and many readers seemed to perceive the views stated to reflect on the Daily Mail’s editorial policy,” McElhinny wrote.

iMediaEthics asked McElhinny if the newspaper has previously had a problem with staff’s personal online postings. “Any media outlet has to walk the line between encouraging social media engagement and being careful. We have not had specific problems before,” he said.

“We might need to look at a more specific social media policy that encourages informing and engaging with our audience but that also provides a degree of caution,” McElhinny added.

“As of this week, Mr. Surber is no longer employed by the Daily Mail. While his sometimes controversial and caustic columns were noted by many readers, few readers realize the in-depth institutional knowledge and substantial contributions he made during his 30-year career here.”

Surber deleted his blogpost Oct. 28 but reinstated it Oct. 30 “without the offensive language,” according to an Oct. 30 tweet.

The “Ferguson” post restored without the offensive language http://t.co/BaBIA28Lnm

The blogpost was titled “Why I stop listening when you say ‘police brutality.'”

A note on the top of the blogpost reads: “republished without the passage I apologized for. Readers who want to carry this on forever should be ashamed of themselves. The post is about two cops shot and killed by an illegal alien the day before the post was published last Saturday.”