WaPo Ombudsman: 'Too Much Officialdom' in Reporting on Storm

WaPo Ombudsman: ‘Too Much Officialdom’ in Reporting on Storm 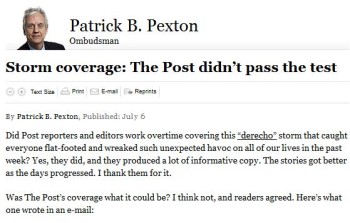 The Washington Post‘s coverage of the late June storm that knocked out electricity in the D.C. area, “didn’t pass the test,” ombudsman Patrick Pexton wrote.

Pexton criticized the Post‘s reporting as “not aggressive enough, and it had too little depth, breadth and creativity.”

Plus, Pexton wrote that the reporting had “too much officialdom, too little humanity” and that the Post should have had more reporters on the ground,

Pexton also noted the Post distributed much of the information about the storm and its effects online only, which meant “many older subscribers — who are key to this publication’s financial stability…couldn’t access it.”

Also, Pexton reminded that because of the power-loss, “only smartphone users had a way to access the Internet,” further limiting the Post’s ability to reach readers.

WaPo Ombudsman: ‘Too Much Officialdom’ in Reporting on Storm