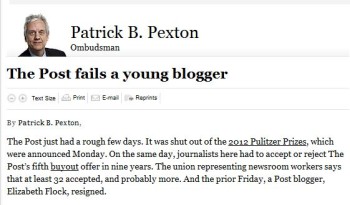 As we wrote, after Flock resigned from the Washington Post last week, the newspaper added an editor’s note to her April 13 blog post “Report: NASA’s Viking robots may have found life on Mars in 1976.”  The editor’s note suggested plagiarism, writing that:

“EDITORS’ NOTE: An earlier version of this report made inappropriate, extensive use of an original report by Discovery News and also failed to credit that news organization as the primary source for the blog post. This was a significant ethical lapse and not in keeping with our journalistic standards. We apologize to Discovery News.”

Flock told iMediaEthics by e-mail last week that the incident was “an honest mistake” in which she “forgot to both credit and link” to Discovery News’ article on the robots.  She explained that that she’s “still not certain how I left out the Discovery attribution, except that I was working too fast.”

Back in December, another editor’s note was added to one of Flock’s blog posts. In that case, the Washington Post corrected and apologized for issues with her Dec. 14 blog post “Mitt Romney is using a KKK slogan in his speeches.”  In that case, the editor’s note explained the original post had “multiple, serious factual errors,” including its headline and “premise” that Romney is using a KKK slogan.  The Washington Post noted that in the ad in question that purposedly “showed Romney using the phrase, Romney actually used a different phrase” and the video wasn’t “a Romney campaign ad.”  The Washington Post noted it also didn’t reach out to Romney “for comment before publication” and that the Washington Post “had not done” proper research for its report.

In Pexton’s April 20 review of the incident, he called Flock’s resignation “the most noteworthy event” in the past “few days” because “the Post failed [Flock] as much as she failed the Post.”

Pexton offered some background on Flock’s position as an aggregation blogger, in which Flock “averaged 5.9 blog posts per day” of “500-word summaries of complicated news events.”

He explained that with Flock’s blog post using Discovery News content, “It appears that she copied, pasted and slightly rewrote two paragraphs from the Discovery story. Plagiarism perhaps, but also a perpetual danger in aggregated stories.”

Further, Pexton noted that Flock “said it was only a matter of time before she made a third” mistake.  He highlighted concerns other “several young bloggers at the Post” now and formerly at the Post about the role and future of aggregation bloggers.

Concerns included, according to Pexton:

In 2010, iMediaEthics, then known as StinkyJournalism, conducted a study of ten U.S. newspapers’ blogs, including those of the Washington Post.

Flock told us by e-mail she had no comment about Pexton’s report.